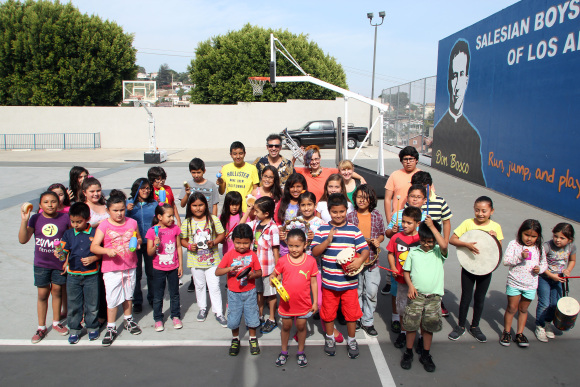 The Boyle Heights Community Youth Orchestra offers free classes to children from 6 to 12 years of age. Photo by Jonathan Olivares.

While the laughter of children is heard daily on the playground at the Salesian Boys and Girls Club on Wabash Avenue, a couple times a week you can also hear music — violins to be precise, coming from the classrooms below the playground where the Boyle Heights Community Youth Orchestra (BHCYO) has its weekly classes.

The youth orchestra has been serving the Boyle Heights community for the last two years, with about 25 music students playing trumpet, clarinet, flute and violin. Suzanne Gindin, the founder and music director, says she wanted young people in the area to experience the joy of music. “I wanted as many kids as possible to be able to have as much fun as I was having on my instrument,” says Gindin.

With budget cuts reducing art and music classes in schools across the state, the orchestra hopes to benefit local youth by offering free classes to children from 6 to 12 years of age who live in Boyle Heights and East LA. The Youth Orchestra offers these children an opportunity to learn an orchestral instrument, and “it opens the door for them to anything they might like to [pursue] in music,” Gindin says.

The orchestra is based on the Venezuelan “El Sistema” program, which is aimed at creating great musicians while changing the lives of the low-income children who participate. Well-known musicians who have been a part of “El Sistema” include Los Angeles Philharmonic’s Music Director Gustavo Dudamel and Edicson Ruiz, a member of the Berlin Philharmonic Orchestra..

Daniel Gómez, 8, has been a violinist in the orchestra since it began. He picked up his first violin there and learned to play his first notes. “I joined because I really like the sound of music, and I wanted to join a group that gave music lessons,” says Gómez. 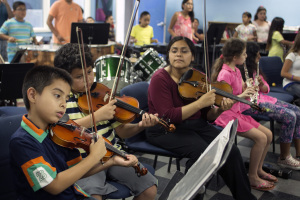 Gindin, who earned her doctorate degree at Northwestern University, says children are often inspired at a young age. She knew she wanted to be a musician by the age of 12. Music is “not really a choice,” says Gindin. “It picks you.”

Before opening the school, Gindin took part in a training program at the L.A. Philharmonic. There she learned how to start a neighborhood orchestra, connect with parents and the community and build an organization supported by the community rather than the schools.

On the first day of lessons back in the summer of 2012, more than 65 students showed up, and teachers had to turn some away. However, after seeing that the orchestra required a lot of practice and commitment, many students left the program.

Gindin says learning music isn’t the only benefit of participating. “They are also learning how to trust themselves, to think independently, to focus on something for a period of time– and they’re learning how to work together as a group and make harmony.”

Gindin taught music at Theodore Roosevelt High School until budget cuts eliminated her position. She knew that she wanted to continue to serve the Boyle Heights neighborhood.

When the Los Angeles Unified School District reduced its arts funding in 2008 to $18.4 million from $34 million, it left thousands of students without any arts education, especially children in low-income communities where parent groups can’t afford to raise additional funding for music in schools. 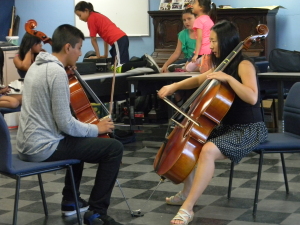 Learning to play orchestral instruments takes a lot of practice and commitment. Photo by Jonathan Olivares.

She says models like the Youth Orchestra not only benefit the children, but the community as well “through concerts, and engaging parents in that experience.”

Parents who play musical instruments understand the importance music has in people’s life.

Rito Orosco, 41, has been playing the drums for 38 years. Orosco has one daughter involved in the Boyle Heights Youth Orchestra and another with the Youth Orchestra of Los Angeles, both El Sistema-structured orchestras.

“You have to be articulate in math because you have to keep time and tempo, and it helps you work also socially with people because we are playing in a unit,” explains Orosco.

Orosco’s 11-year-old daughter, Isabel, plays the clarinet and hopes to be a music teacher when she’s older. She says music has made her more confident and allows her to express herself, something she wants to share with others.

“It makes me feel good because instructors come here to teach us music not just because they are getting paid but because they want to and they like it,” the 11-year-old says.

The students perform about five or six times a year. The Youth Orchestra puts on three of the concerts, while the other performances are held at other venues. When the orchestra began, the goal was for the students to play at Walt Disney Concert Hall in five years, and, according to Gindin, they are on target.

“I’ve always gone for concerts and I’ve wondered how it felt like to be on that stage”¦I would be excited to perform there,” says Isabel Orosco.