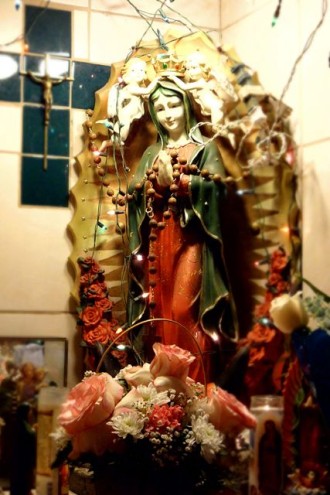 Thousands of faithful followers across Boyle Heights assembled for early morning masses or evening procession walks this week to celebrate the feast day of Our Lady of Guadalupe, Mexico’s most popular religious and cultural image.

Wednesday night, El Mercado de Los Angeles hosted a lively celebration around the a shrine dedicated to the Virgin of Guadalupe, with entertainment into the early morning for the traditional mariachi rendition of “Las Mañanitas.”

At the Wyvernwood Garden Apartments, residents met to honor the virgin days leading up to the Dec. 12 culmination. Thursday, families crowded for a rosary prayer and mass, leaving flowers around a candle lit shrine.

“To me, this means remembering the Virgin of Guadalupe during this Christmas time because she is the mother for all Mexicans, and because we love her. Offering her prayer helps us to have more strength to keep going,” said Veronica Cornejo, 41, during a pilgrimage in Wyvernwood Wednesday night.

“It’s a tradition that my mom and my grandparents instilled in me. And I want to continue this tradition with my children so they do it when they grow up and I no longer can,” added Cornejo.

According to official Catholic dogma, in 1531 Lady of Guadalupe, an incarnation of Mary, appeared before Juan Diego, an indigenous man who had converted to Catholicism. Three days later, on Dec.12, the image of the Virgin appeared on his cloak and served as proof of her identity to the Spanish archbishop.