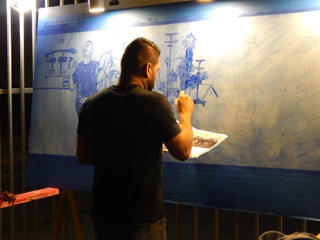 The Los Angeles Times reports members of the Boyle Heights Alliance Against Artwashing and Displacement held a news conference on the steps of a vandalized art gallery. They expressed their frustration with the allegations of an anti-white hate crime while several fatal shootings of people or color by the LAPD are under investigation, the LA Times writes.

The LAPD tells the Times that they are investigating the incident as a hate crime because the graffiti makes an “anti-white” reference. They add that drawing parallels between the investigation into the fatal shooting of Jesse Romero and the ant-white graffiti are unfounded.

Tensions between art galleries and activists have been high as some believe the boom in galleries is raising property values and displacing long-time renters. Protesters served several art galleries mock eviction notices earlier this year calling them gentrifies.

Mihai Nicodim, owner of the vandalized Nicodim Gallery anda Romanian immigrant, tells the Times that many of the artists that he displays are not white and that he has featured exhibits from a Chinese and a black Colombian artist. Nicodim says he intends to stay in Boyle Heights.

Photo above: Artist Ray Vargas paints a Boyle Heights mural for a mobile art exhibit during a protest against new art galleries in November of 2015.