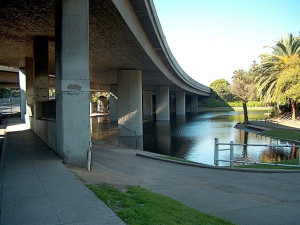 *Updated:
A body found Thursday floating in the lake at Hollenbeck Park in Boyle Heights has been identified as 36 year-old Lorenza Arellano, said the Los Angeles County Coroner’s Office.

At about 10:15 a.m., Los Angeles police were called with reports of a person found in the lake.

Arellano’s body did not have any visible signs of trauma, and authorities have not ruled out a possible suicide, drug overdose or accident.

Baeza said local transients who might have known the woman were questioned; however, no suspects or people of interest have been identified.