Editors note: we are reposting this story from 2015 to celebrate the Bridge Runner’s fifth anniversary 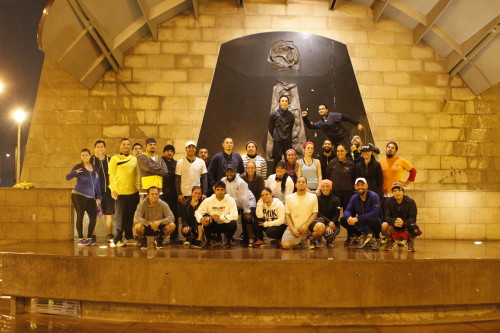 When Lizette Pérez started running at age 13, it was mainly to get away from her siblings and clear her head.  Now, 16 years later, she continues to run, but for different reasons. Pérez can be found every Wednesday night on First Street in Boyle Heights among 80 other runners eagerly waiting to start their usual run.

Pérez is part of a group, the Boyle Heights Bridge Runners, whose members run together three or more miles weekly across the bridges on 1st and 4th streets and through other areas of Boyle Heights.   “We share thoughts and ideas and things that are happening locally,” Pérez says. “It’s a beautiful thing to bring people together.”

Running clubs such as the Bridge Runners provide a way for members to interact with the community. Many Boyle Heights residents struggle with health issues, such as obesity, and this running group helps promote a social way to exercise. Running can improve health, prevent disease, reduce stress and even boost self-confidence.

Boyle Heights resident David Gómez, 45, founded the Boyle Heights Bridge Runners in 2013 with the idea of getting the community together in a social and active way. Gómez belonged to a running club in Pasadena and wondered why only affluent neighborhoods had such clubs.

“It’s a way for us to get together in the community, because all the runners come from all different sides of life,” says Gómez.   “There’s mechanics, there’s teachers, there’s artists, activists — it doesn’t matter. We all get here, and we all live in this area, and we like to run.”

When the Bridge Runners started in August 2013, it had only six to 10 runners. In August, it celebrated its first anniversary, and now more than 100 runners participate. They meet at 7:45 p.m. every Wednesday in front of Espacio 1839 and start running by 8 p.m.

Gómez says many people have told him that they never imagined being part of a running group and view their participation mainly as community building.

Mark J. Springett, a certified sports psychology consultant in Los Angeles, says running with like-minded people is beneficial and helps with motivation. Springett says running alone requires more discipline, but when “running in a team, you’re fueled by the energy of the group.

“While some people are more competitive than others,” Gómez says, “We tell people that it’s more about getting together, getting to know people and running as a community, rather than be first to finish the course.”

This year Pérez decided to run the Los Angeles Marathon in March, just two weeks beforehand after other runners told her she should do it. At first she was unsure about running the marathon without having trained properly.

While she has been running for more than 15 years, it was her first marathon. She says she wouldn’t have done it if it weren’t for the BH Bridge Runners. “They knew my potential I didn’t even know,” she says.

Pérez ended up finishing in 3 hours and 59 minutes. She was amazed that even without training, she finished with people who looked like triathletes.

Besides offering the opportunity to interact with the community, running also provides many health benefits. According to a recent study in the Journal of the American College of Cardiology, running can add about three extra years to someone’s life. Running can help you keep a healthy weight, burn calories, build strong bones and improve cardiovascular fitness. Even running just 10 minutes a day can help prevent death from cardiovascular disease, the study found.

Elisa García, a South Pasadena resident who works at Espacio 1839, is the co-founder and anchor of the BH Bridgerunners. She says her motivation for running is staying healthy as she gets older and that running is something everyone can do.

“Running is a really inexpensive way to stay in shape,” says García.   “You just need to get your shoes, and you’re out the door.”

As an anchor, García makes sure that no one gets left behind in the run and that everyone is safe. García believes that running at night in a group can be safer than running alone.

“You’re automatically more visible to people on the street just in case if something happened to you,” García says. “You have other people accountable.”

Several runners from the BH Bridge Runners completed the LA Marathon this year, and some ran the Boyle Heights 5K this October as a team. Some members are setting even bigger goals.