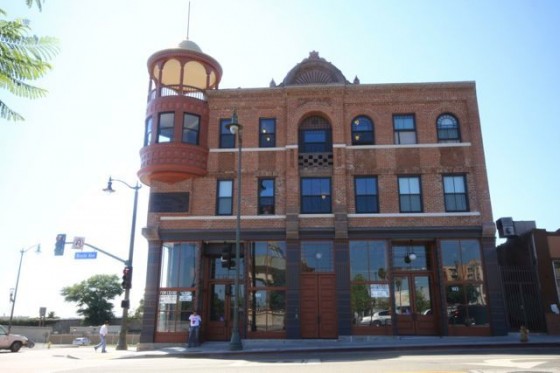 Once known as the “Gateway of Boyle Heights,” the Victorian-style Boyle Hotel-Cummings Block reopened its doors Thursday after a two-year, $24.6 million restoration.

Built in 1889, the four-story luxury hotel””originally the tallest building in Boyle Heights””became a neighborhood center for civic and social gatherings. In recent years, the hotel housed local mariachi musicians who looked for work at Mariachi Plaza, located across the street on First Street and Boyle Avenue.

But tenants were relocated in 2010, after East Los Angeles Community Corporation (ELACC) led a renovation project to save the landmark that had fallen into disrepair in the last few decades.

The property’s interior underwent major restoration, with seismic reinforcement, a new roof, floors, doors and fixtures, and individual kitchens and bathrooms. Plumbing, electrical, gas and air conditioning systems were also replaced. Although bringing the property up to code was a priority, so was preserving its historical features, such as the iconic cupola, says ELACC.

“The historical part of the building is the exterior, but the interior was remodeled so much over the years that we just decided that it would be better to only keep the exterior and re-use the inside,” ELACC project coordinator Ernesto Espinoza told Boyle Heights Beat.

Earlier this year, Boyle Heights Beat reported the Boyle Hotel would open in May with rents ranging from $330 to $975 for studio units and one to three-bedroom units. However, construction delays forced tenants to wait until early August to move in, according to ELACC. And when some were ready to move, the rents were steeper.

Mariachi musician Benjamin Barboza told the LA Times he was quoted $658 monthly, but was then informed that his rent would be $1,048.

“I feel deceived, defrauded and sad at the same time,” Barboza told the Times.

“We made a human error that led to our inadvertently quoting incorrect rents,” said ELACC Associate Director Isela Gracian in an email. The difference, Gracian explained, “is going back to the building so that it can meet its sizable operating expenses and mortgage.”

Still, the corrected rents are 33% below the average rents in the area, added Gracian.