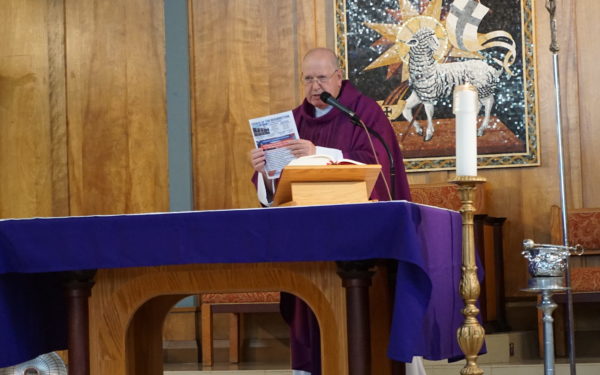 His voice booms throughout the church as he speaks. Tall and charismatic, he jokes with parishioners and laughs loudly.

Monsignor John Moretta is a person synonymous with Resurrection Church and a name many throughout Boyle Heights will recognize. At 75, an age when many might think of retiring, he still works hard to bring the Boyle Heights community together as both an activist and a priest. Moretta led the charge in community fights against the building of a power plant in the city of Vernon and the large number of liquor stores and marijuana shops in the neighborhood. Most recently, the Neighborhood Watch group has been monitoring the cleanup of lead contamination due to battery recycling operations of the now-closed Exide Technologies plant.

Born and raised in South Los Angeles, Moretta is a proud Angeleno. He was ordained in Huntington Park after spending eight years studying at St, John’s Seminary in and has been a Catholic priest for the past 49 years.

“What inspired me was that I wanted to save my soul,” says Moretta. “I wanted to help other people save their souls as well.”

Terry Márquez, a longtime Boyle Heights resident, has known Father John for more than 30 years. She says the Neighborhood Watch meetings began as a result of gang violence in the neighborhood, but have expanded to cover other community issues.

“The people couldn’t go anywhere, not even to the church, because there were always shootings,” says Márquez. “People were dying every day.”

Los Angeles Police Officer Ralph Medina of the Hollenbeck division attends many of the Neighborhood Watch meetings.   He says Moretta is quick to alert him of any safety issues and concerns and is very involved with people on a personal level.  He sees firsthand the impact that Father John has had on the community.

“When he’s on a mission, he accomplishes that mission,” says Medina. “He doesn’t back off.” Moretta says that the Exide contamination issue was largely ignored until the community started to band together and demand that the situation be addressed.

“It wasn’t until the people started picketing, started becoming educated, that eventually the federal government had to make an intervention,” he says.

Moretta says he’s often been asked why he gets so involved in community issues. “It’s very important, and as a priest I feel that it’s just like anything,” Moretta says. “It’s just like the treatment of immigrants right now. The church is going to get involved in that.”

Recently, Resurrection Church has been offering free citizenship classes because of a great fear in the community over the Trump Administration’s crackdown on undocumented immigrants. “I would say that palpably you can feel a certain tension in the air,” says Moretta. “You can feel a certain sadness because we don’t know what this president is going to do next.”

At a recent Neighborhood Watch meeting, Moretta mentioned that he’s received calls from people criticizing him for his work to aid and protect the undocumented.

“How can you help people who are breaking the law?” an anonymous caller asked. Moretta describes this call and other anti-immigrant comments by people throughout the United States as terrible and dehumanizing.

“How can these people say these sorts of things?” Moretta exclaims. “We all have the right to be treated as people.” In the polarized nation we live in today, it’s important that people respect each other, he says.

Marquez describes Moretta as not only a spiritual leader, but someone people can trust. She says that people should learn by Moretta’s example.

“His heart is in the community. Everything he does is for the people,” she says.