For artists Fabian Debora, Lori Shocket and Mike Saijo, the history of social movements in Boyle Heights is both political and personal.

“When I moved to Boyle Heights, I found something there that really resonated,” said Saijo, a Japanese-American who grew up in the San Gabriel Valley. “I’ve always been seeking a sense of home.”

The Boyle Heights resident was inspired to find out more about his neighborhood. Those explorations led him to Evergreen Cemetery.

“The grass is never green,” joked Saijo. “But you get a vibe. You hear stories that come from the tombstones, some knocked over, some of them from a couple hundred years ago. It’s a powerful place.”

“Evergreen” by Mike Saijo. Photo courtesy of the artist.

In his piece, “Evergreen,” each spoon, all different sizes, spell out the cemetery’s name. For many Japanese, it was the first time seeing these utensils. Having to adapt to a different culture and customs, Saijo elevates them from the grave like floating spirits.

The exhibition itself, originally shown at the Breed Street Schul last year, was the type of collaboration depicted in progressive movements in Boyle Heights. “How communities can come together and make something beyond what we can imagine doing on our own is a very powerful thing,” said Saijo. 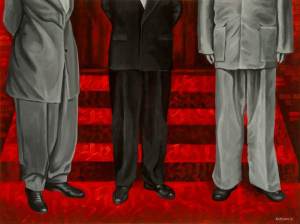 “Meet on Brooklyn Avenue” by Fabian Debora. Photo courtesy of the artist.

It was in his younger days as a gang member that Fabian Debora broke into the Breed Street Schul and left his placaso, a graffiti mark showing his gang affiliation. Last year, Debora found himself back in the temple– this time, as an invited artist to display new work.

Debora, born in El Paso, Texas, is a self-taught artist who used his creativity to escape from the harsh realities of living in Boyle Heights. “It’s been a tragic place in many ways,” says Debora, who moved to the neighborhood in 1980. Then a five-year-old, the artist had to weave through the more difficult terrain of drugs and gangs in the housing project of Aliso Pico. “As a young kid, I would go hide under a coffee table. I would get my notebook and I would create my own worlds to escape my reality,” says Debora, who recalls episodes of domestic violence in his family. “That’s when I found art to be meaningful.”

Debora, who created “Meet on Brooklyn Avenue,” a painting showcasing the lower part of three men, a pachuco, a rabbi and a Japanese-American. The three men are standing in front of The Breed Street Schul steps. Over the steps appear Japanese script, Hebrew and gang tagging. While all overlap, there’s no friction. Instead, the shapes of letters mesh seamlessly.

“We are all created equal,” said Debora, who explores issues of healing through the neighborhood’s trauma. “We are all the same. There’s no us and them. It’s all about the struggle and the experiences.”

Healing is something Lori Shocket knows something about. At the age of 56, the artist became a doctor.

“I wanted to somehow figure a way to combine my art with science. And to be able to give back to different communities,” said Shocket, who works with many Latino patients.

“Nigun for Peace” by Lori Shocket. Photo courtesy of the artist.

Her work, including “Nigun for Peace,” a vibrant piece that is both a celebration of Jewish life but reminders of chaotic history, is part of the healing process.

“As much as you look at something like this which is sort of painful to look at, you also look at a moment of transition, a moment of healing,” said the artist.

“It’s all about reconstructing memories but also knowing that out of a terrible Holocaust or the history of the Japanese, the Mexican-Americans, the Jews, there comes health, renewal and enlightenment,” said Shocket.