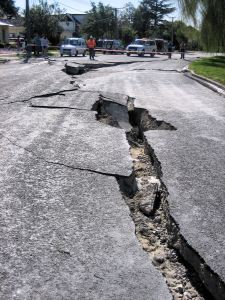 The University of California surveyed buildings across Los Angeles and determined that 1,454 were unsafe and in need of retrofitting– 28 were in Boyle Heights. Photo by Flickr user Martin Luff/Creative Commons

Last March, Lincoln Heights resident Allison Wallace experienced her first earthquake. Seven months pregnant, the Missouri native knew how to prepare for tornadoes, which are common in the Midwest, but not for an earthquake.

“When it first hit, I didn’t quite realize what was happening. I thought the building was going to collapse,” said Wallace, who moved to Los Angeles’ Eastside for college.

When Wallace saw her friends duck under the table that night, she froze in terror, but then followed their lead. “If I actually had a procedure and knew what to do,”¦. I wouldn’t have been so nervous,” said Wallace.

Wallace isn’t the only person who is unprepared for an earthquake. Thirty six percent of the county’s residents say they do not feel prepared, according to a 2005 Los Angeles County Health Survey.

The recent Napa earthquake in Northern California serves as a wake-up call for all Californians. Southern California experienced its largest magnitude quake in recent memory 20 years ago with the 1994 Northridge quake, although there have been smaller tremors since.

The U.S. Geological Survey predicts that Southern California has nearly a 50 percent chance of an earthquake of magnitude 7.5 or greater on the Richter scale in the next three decades, one that could result in 1,800 deaths and $213 billion in economic losses. Although resources are continually offered to prepare for the looming “Big One,” many residents have yet to take steps.

Most Los Angeles residents have never experienced a catastrophic earthquake, especially the younger generations. But many Boyle Heights residents who have emigrated from Mexico have.

A close call
Fabiola Martínez, who sells magazines at a newsstand outside the LAC+USC Medical Center, experienced an 8.1 magnitude earthquake in Mexico City in 1985. She had almost spent the night before in a hotel near the epicenter, and “the day after the earthquake hit, I saw that the hotel where I was going to stay had turned into a sandwich. I was left with my mouth open.”

She feels fortunate she was not in L.A. during the Northridge earthquake, but her experience in Mexico left her alert. “I sleep with one eye open, but I sleep more calmly,” said Martínez about the possibility of an earthquake striking at any moment.

An earthquake occurs when tectonic plates, part of Earth’s crust, move. Energy is released in the form of seismic waves, which causes the ground to shake. Although large magnitude earthquakes can occur in all 50 states, they’re more likely in California than in many other states because of the San Andreas Fault, which runs 700 miles from Northern to Southern California.

While K-12 students receive earthquake preparedness education every year through the “Shake Out” drill, parents may not be receiving training on how to respond. Throughout the year, local government and non-profit organizations, such as the American Red Cross, offer disaster preparedness classes and workshops in hopes of teaching others how to safely plan for natural disasters and emergencies.

The U.S. Geological Survey predicts that Southern California has nearly a 50 percent chance of an earthquake of magnitude 7.5 or greater on the Richter scale in the next three decades. Photo by Flickr user Artur Bergman/ Creative Commons

Los Angeles Fire Department Captain and CERT director Keith Scott says it is imperative that “people are trained to assist the public themselves” because during a major earthquake, the city’s police and fire departments will be busy responding to major damaged areas and some 911 calls may go unanswered.

Crystal M. Valenzuela, a Monterey Park resident, participated in the CERT program training this year. She now keeps emergency kits in her cars and next to her bed.

Valenzuela says the training has helped her become physically, mentally and emotionally prepared. “If you have no one there that’s trained, it’ll make all the difference in the world– perhaps who lives and who dies or how quickly someone can get assisted,” she says.

Last February, the University of California surveyed buildings across Los Angeles and determined that 1,454 were unsafe and in need of retrofitting. There are 28 buildings in Boyle Heights on the list, including First Street Elementary School.

Individuals are encouraged to make their homes safer through retrofitting, but it can be difficult for everyone to make the necessary changes. “Many earthquake safety measures are things an individual can do, but are not required by law,” says Jones. “It is harder for low-income people to prepare. You are not going to store a two-week supply of food when you are struggling to afford tonight’s dinner.” Still, Jones stresses the importance of preparing an emergency kit and having a family plan.

Martínez rents her apartment, which limits what she can do to make it safe in an earthquake. But she has still managed to prepare by creating a kit and establishing a meeting point with her family.

Rather than wait for another catastrophe to strike, she has raised her family with earthquake preparedness in mind.

“My kids each live in their own home and apartments, but we have an emergency location. If an earthquake hits, then we will see each other there if anything happens,” she says.

– One gallon of water per person per day for at least three days
– At least a three-day supply of non-perishable food, plus a can opener
– Battery-powered or hand crank radio and a NOAA Weather Radio with tone alert -plus extra batteries for both
– Flashlight and extra batteries
– First aid kit and whistle to signal for help
– Moist towelettes, garbage bags and plastic ties for personal sanitation
– Prescription eyeglasses and medicines
– Dust mask to filter contaminated air and plastic sheeting and duct tape to shelter in place
– Wrench or pliers to turn off utilities
– Local maps
– Necessities for any infants or pets

What to Do During an Earthquake
Source: Consrv.ca.gov

– If you’re indoors, stay there. Get under — and hold on to –a desk or table, or stand against an interior wall.
– If you’re outside, get into the open. Stay clear of buildings, power lines or anything else that could fall on you.
– If you’re driving, move the car out of traffic and stop the car away from bridges, trees, light posts, signs and power lines.
– If you’re in a mountainous area, beware of the potential for landslides.
– If you’re in a crowded public place, avoid panicking, and do not rush for an exit. Stay low and cover your head and neck with your hands and arms.

– Discuss with your family potential hazards that could impact your local area; what to do if your community’s warning signal sounds and where to take shelter if the area is evacuated.
– Determine where to meet in an emergency. Designate one location right outside your home in case of a sudden emergency, like a fire, and another location outside your neighborhood in case you can’t return home.
– Ask an out-of-town friend or relative to be your emergency contact. Following a disaster, family members should call this person and tell him or her where they are because local phone circuits often are busy after a disaster.
– Make a communication plan so that all family members know how to contact each other. A form for recording this information can be found at www.ready.gov or at www.redcross.org/contactcard.
– Include plans for your pets in your family disaster plan.
– Practice the plan.
– Get home/property insurance