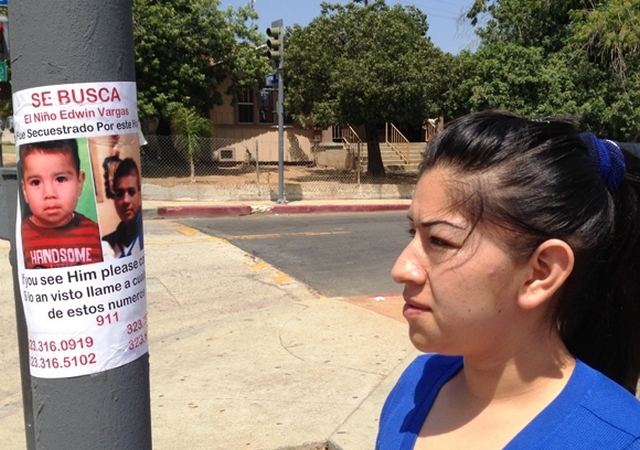 This story was originally published in La Opinion

Desperate after her child was kidnapped five days ago, Beatriz Pérez is asking for the public’s help in finding her 2-year-old son Edwin Vargas.

The Amber Alert for Edwin’s disappearance remains active from 6:36 am on Friday, May 23 when he was kidnapped in the 1000 block of Lorena Street in Boyle Heights.

As Perez prepared to drop off her child at daycare before going to work, her former partner, Abraham Vargas, approached the family and took her son along with her vehicle, which was later found about five miles away.

Abraham Vargas, 27, who is Edwin’s biological father, had a restraining order since March. Perez had full custody of the child.

Police have been unable to trace the whereabouts of the father or the son, but say they have not left the state.

Beatriz said two months ago she requested the court order for Abraham to stay away after constant threats she received.

“He said he was going to hit me where it hurts most, my son. He harassed me. Once he stole my car, another time he removed the ‘sticker’ of the plate so that the police would stop me. He threatened me, followed me often. He was obsessed with me,” said Perez.

For two years Abraham Vargas had remained in his native Veracruz, during which Perez did not hear from him nor receive financial assistance for the costs of their child, said the mother.

Last November, she said, Abraham Vargas returned without legal documents to the United States and thereafter began the threats.

“Sometimes I’d take my son to the park and he’d sent me photos of Tijuana,” said Perez. “Photos, which I imagine he had taken before. He’s say he was already there and threatened me that he would take my son to hurt me and that the law would do nothing to him.”

The family has posted flyers in some posts in Boyle Heights with photographs of Edwin and Abraham Vargas.