Alex Villanueva says he intends to begin a reorganization of the Los Angeles Sheriff’s Department on the day he’s sworn in as the embattled agency’s new chief.

“House cleaning is going to start day one,” Villanueva said at a gathering with supporters on Nov. 16, where he declared victory.

On Monday, almost three days after the Nov. 6 election, incumbent Sheriff Jim McDonnell called Villanueva to concede the race after newly-released results showed the challenger had an insurmountable lead.

“Today, I contacted Alex Villanueva to offer my best wishes for his administration as the 33rd elected Sheriff of Los Angeles County,” McDonnell said in a statement. “We are in the process of arranging an orderly transition and a series of briefings to assist the new administration and it is my hope that the Sheriff-elect will come to his new position with an open-mind.”

Throughout the election, Villanueva was seen as unlikely to defeat McDonnell, who was a stronger fundraiser.  (The Los Angeles Times reported this month that the district attorney’s office is investigating a complaint about potentially illegal “straw donors” who contributed to Villanueva’s campaign. Straw donors –individuals who contribute to a campaign under somebody else’s name– are forbidden by the state, but Villanueva told the Times he is not concerned about the investigation and questioned the ethics of the investigation, since District Attorney Jackie Lacey supported McDonnell.)

As new Sheriff, Villanueva would oversee policing of all the county’s unincorporated areas, including East Los Angeles, and of half of the cities in Los Angeles County. He would also be in charge of a scandal-plagued jail system that typically houses some 18,000 inmates, about a third of whom are mentally ill.

Villanueva, who would become the first Spanish speaker and first Democrat to become Los Angeles Sheriff in over 100 years, appears to have won the race with overwhelming support from Latino voters. Pollster Martín Barreto, who runs Latino Decisions, told the Los Angeles Times that Villanueva obtained 84% of the Latino vote. A Times analysis of the results found that Villanueva did best among voters in the County’s most heavily Latino populated areas, including Boyle Heights and East Los Angeles –where he was once stationed. 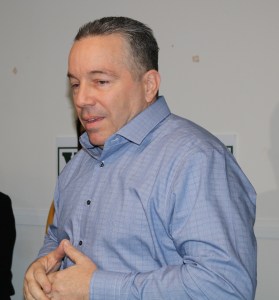 A retired sheriff’s lieutenant of Puerto Rican and Polish-American heritage, Villanueva, 55, said his support of SB54 –the state’s so-called Sanctuary Law that limits the Sheriff’s interaction with federal immigration authorities– may have been influential in his election.

“I think that the plight of the immigrant community resonates deeply with every single family throughout LA County,” he said, “so when they were voting at the polls, that was definitely one of the big issues on their minds.”

Villanueva was endorsed by former Senator Kevin de León, the author of SB54, and by the Coalition for Humane Immigrant Rights, or CHIRLA, whose volunteers joined his campaign. He put his support of SB54 front and center of his appeals to Latino voters, at rallies where he spoke in fluent Spanish and in interviews with Spanish-language media.

“What we saw in Alex Villanueva was somebody who sat down and talked to our members, immigrant families, who engaged them directly in conversations about what their hopes and dreams were for safety in their communities,” said Angélica Salas, board president of the CHIRLA Action Fund.  “He sat down with them and talked to them, and our members were so excited about his candidacy and the possibility that finally they would have somebody that would respect them and treat them fairly and equally.”

At the gathering held at his election headquarters, a small storefront on Beverly Blvd. in East Los Angeles, Villanueva said he intended to “honor” the Sanctuary Law and keep his promise of denying access to county jails to Immigration and Customs Enforcement (ICE) agents.

“I said I was going to kick ICE out of the jails and I actually meant that,” he said, explaining that prisoners that qualify to be transferred to immigration authorities under the state law would be handed over outside of county facilities. “We’ll transfer them to the custody of ICE, but we’re not going to have uniformed ICE agents roaming the halls of the county jails anymore, we’re not going to have them scaring our inmate population and delivering that message, to their families and friends on the outside, that ICE and local law enforcement are cooperating, because that definitely does not help public safety.”

Support for SB54 was one of several issues that distanced Villanueva from McDonnell. The incumbent is a former Republican who ran as an independent and describes himself as a “progressive.” The challenger ran openly as a Democrat in the nonpartisan race. 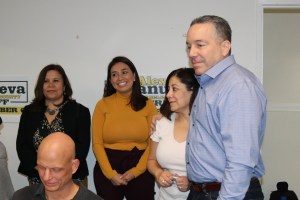 Villanueva and his wife Vivian address supporters at his election headquarters in East Los Angeles.

McDonnell, 59, was endorsed by the Los Angeles Times and the area’s principal elected officials, including Los Angeles mayor Eric Garcetti and County Supervisor Hilda Solís. The County Democratic Party and other local party organizations, however, endorsed Villanueva, as did La Opinión and Hoy.

McDonnell, an outsider when elected in 2014 who spent 30 years in the LAPD before a short stint as chief of the Long Beach Police Department, had the support of the Professional Peace Officers Association, a union representing high ranking employees of the Sheriff’s Department. Villanueva, who became a Sheriff’s deputy in 1986 (and met his wife Vivian, in 1993, when both were deputies assigned to the East Los Angeles station), was endorsed by the Association of Los Angeles County Sheriff’s Deputies, which represents the men and women working the streets. His last job with the department was as one of three watch commanders in the Pico Rivera station, where he supervised about 25 deputies on any given shift.

While McDonnell was elected as a reformist in 2014, the department continued to be plagued under his tenure by allegations of racial profiling of Latino motorists, suspicious deputy-involved shootings and other disturbing charges against employees.

Villanueva, who claims he was kept from rising higher than Lieutenant in rank because he spoke openly against former Sheriff Lee Baca (who resigned in 2014 and was convicted after a 2017 FBI corruption investigation), said McDonnell’s reform efforts focused too much on the deputies and not enough on the command staff.

The deputies’ union sued to block McDonnell from releasing the so-called “Brady List” that  includes the names of some 300 deputies who have credibility problems with the district attorney, which Villanueva called a “fake list.”

Another reform that Villanueva has criticized has been McDonnell’s intent to get rid of a culture that includes individual station logos and tattoos worn by deputies that signal the existence of what some have categorized as gang-style “cliques.” Villanueva said during the campaign that forcing deputies to get rid of tattoos undermines their morale, and that he intends to return to use of individual stations’ logos.

Both Villanueva and McDonnell said during the campaign that the department needed to improve its recruitment efforts, and during a Spanish-language interview at his victory celebration, the apparent winner hinted that his recruitment efforts would actually contribute to a culture of regional pride.

“I want to recruit deputies from the same communities we serve,” he said. “A child that grows up in Compton, I want him to be a deputy in the city of Compton. Same for East Los Angeles. That way you have inclusive representation within the department. That’s how we base community policing on a solid base.”

Shortly after declaring victory at the East Los Angeles gathering, Villanueva promised “a lot of changes” once the Sheriff’s badge is pinned on his uniform.

“When I spoke of turning the pyramid upside down, I was dead serious about that,” he said. “What is going to drive this organization is going to be public service, the era of cronyism, the era of corruption, all those things that have been brewing for 20 years unchecked, they’re finally going to be addressed.”

“We’re going to have a whole new era where the community and organization are going to come together as one and we’re going to provide public safety for everyone, regardless of where you come from, where you were born, who you associate with, who you worship… you set foot in LA County, you are the responsibility of the Sheriff’s department and [as] the Sheriff, I’m going to take that responsibility seriously.”

In an interview last week with LAist, Villanueva detailed that one of his first moves would be to get rid of two constitutional policing advisors who advise department brass on a variety of the most controversial matters, including the department’s use of force policy and the disciplining of deputies accused of misconduct.

Villanueva called the hiring of the advisors as a “dog and pony show” that does not address systemic issues and has said he would used the money that pays for the positions to fund a truth and reconciliation commission that would review potential wrongful convictions and terminations of deputies.

When asked about a number of recent deputy-involved shootings –including two earlier this year, where unarmed men were killed– Villanueva said there needed to be more transparency in how these cases are processed as well as improvements in deputy training.

“We’re way below the minimum standards that the state mandates in training for our deputies who work on the streets, and that is going to be one of our top priorities,” he said.

Born in Chicago to a Puerto Rican father and a Polish-American mother, Villanueva was raised in Puerto Rico and started college there before joining the Air Force.  He moved to Southern California in 1983, when he was assigned to Norton Air Force base in San Bernardino. Three years later he joined the Los Angeles County Sheriff’s Department. He continued his higher education both in the military and on the job, and in 2005 earned a doctorate in Public Administration from the University of La Verne.

He and his wife have lived in La Habra Heights since 2004; the couple has a son and two granddaughters.

In a message posted on Twitter on Monday, Villanueva called attention to the fact that he will be the first Spanish speaker Sheriff in LA county since Martín Aguirre ended his tenure in 1890. (There were two 20th-century Sheriffs with Spanish or Mexican heritage, including Baca, but neither identified as Latino or spoke Spanish fluently.)

The first Puerto Rican to be elected Sheriff in any U.S. jurisdiction, Villanueva said that his ability to speak Spanish will be an important asset –especially when dealing with the immigrant community and those who fear law enforcement.

“Considering the size of the Latino community in Los Angeles, particularly those that only speak Spanish, it’s very important to have someone who sits in the office of the Sheriff who actually is a reflection of the community at large, [who] understands the culture,” he said.

Photo above: Alex Villanueva with his wife Vivian at election headquarters in East Los Angeles.

This post was updated on Nov. 27 to include McDonnell’s concession.