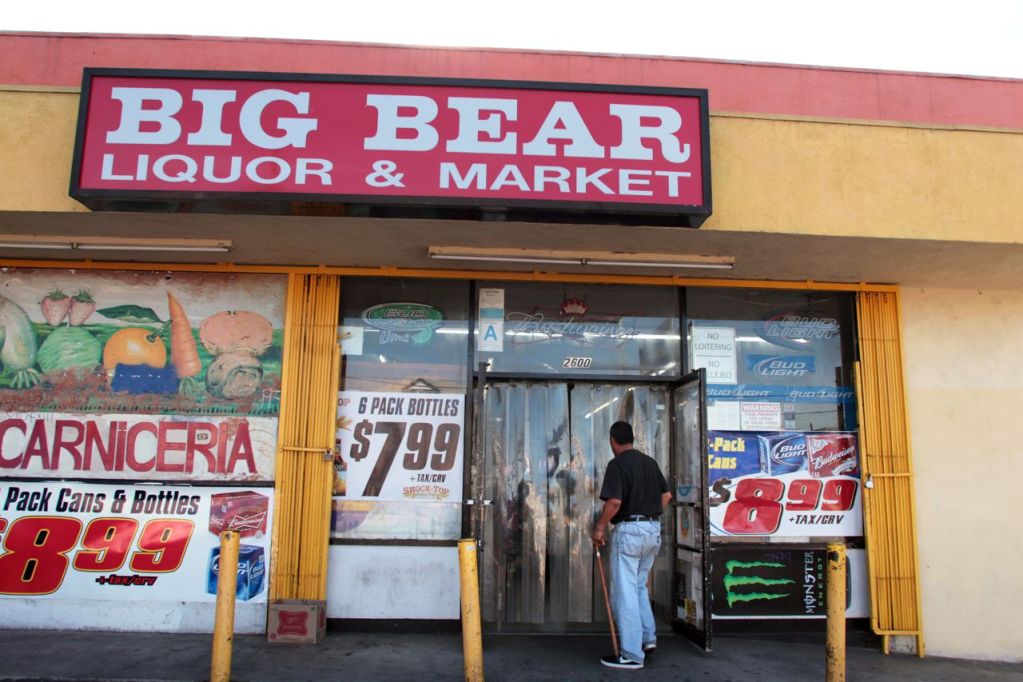 Outside of the Big Bear Liquor Store on the corner of 1st and Fickett Streets./ Photo by Jonathan Olivares

They seem to be everywhere.

In some neighborhoods of Boyle Heights, stores selling alcohol appear to be on almost every block. They sell beer, wine, and sometimes liquor, along with items like candy, Lotto tickets, magazines, and milk.

According to a Boyle Heights Beat analysis, Boyle Heights, with 100 stores that sell alcohol, has 77 percent more stores than West Covina, which has 57, and 45 percent more than Compton and Santa Monica, which have 69. All are communities with roughly the same number of residents. (View community maps below.)

Some locals believe that alcohol is too readily available in Boyle Heights. “We have so much temptation here,” says Teresa “Terry” Marquez, 64, a community activist, retired bank manager, and president of the Boyle Heights Stakeholders Association. “You would have to be totally blind not to be aware” of the large number of alcohol outlets.

Marquez has been tracking liquor licenses in the neighborhood since the 1970s. Her volunteer group, the Boyle Heights Stakeholder Association, is co-sponsoring a community meeting this Thursday evening on the impact of alcohol in Boyle Heights along with the Boyle Heights Coalition for a Safe and Drug Free Community and the Voice Community News.

Local elected representatives, police, health and regulatory officials are expected to join the public for a discussion at 6 p.m. at Resurrection Church at 3324 Opal Street, she says.

Marquez calls the current situation “really sad” and asks, “Is it necessary to have this much liquor?” She isn’t the only one who is concerned. The Boyle Heights Coalition for a Safe and Drug Free Community has launched a campaign to limit ”“ and ultimately reduce ”“ the number of liquor licenses in Boyle Heights. The group is asking residents for letters voicing their dismay. 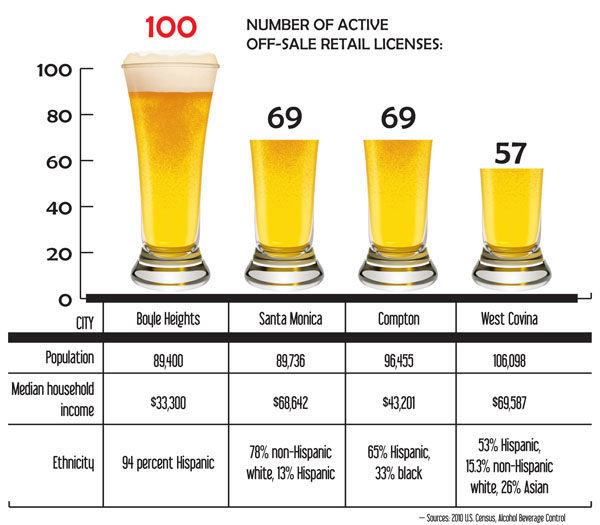 “There is a big problem in Boyle Heights. We are allowing too many liquor stores in our community,” says Denis Quiñonez, 26, director of the Boyle Heights Coalition for a Safe and Drug Free Community. The coalition has about a dozen recommendations for combating the problem, not just in Boyle Heights, but citywide, countywide, and in unincorporated East L.A. They include restricting hours during which alcohol can be sold, limiting shelf space and signage, and requiring surveillance.

He doesn’t want it to be.

Quiñonez is encouraging Boyle Heights residents to write letters. By the end of March, he’s hoping to receive 1,000 letters expressing concern over the abundance of alcohol vendors in Boyle Heights. He plans to present them to local policymakers later this year.

Convenience stores that sell alcohol are “magnets for trouble,” says Dr. Richard Jackson, chair of Environmental Health Sciences at UCLA’s School of Public Health. Studies show that they are linked to criminal behavior. “Where there are higher numbers of liquor outlets, you have higher rates of crime, injury, battery ”” including both stranger and domestic abuse episodes,” he said. Jackson added that there is no evidence that the drinking rate is higher in poor communities. “Too often in our society, we say, there are more liquor stores because poor people drink more and actually that is not true, Jackson says.

In 2007, Bing-ru Teh, a graduate student at the University of California at Berkeley, studied whether liquor stores increase crime and urban decay. Overall, he concluded, it appeared that additional alcohol outlets, especially in low-income neighborhoods, “contribute to both crime and urban decay.”

Another concern about the number of alcohol outlets is that alcohol can become “an entry to other drug uses,” Jackson said. “It has a whole series of negative impacts for the individual (and) tends to create its own culture.” Pre-teen and teenage boys are at particular risk, Jackson said, with teenage girls close behind.

There are several reasons for the abundance of liquor outlets in poor neighborhoods, according to Jackson. Mom-and-pop shops typically don’t have a lot of capital, making liquor a desirable item to sell, since it brings in higher profits. They also usually have limited refrigeration and shelf space. Unlike fruits and vegetables, liquor is not perishable. And, these communities have less political power, Jackson notes.

Jackson suggests that people voice their concerns, but understands why many don’t. “Often times, people in wealthier communities have better education, maybe more free time in their lives, more capability and, frankly, more confidence in voicing their opinions than someone who is poor, maybe is working two jobs, has little education, and may be undocumented and afraid to voice their position,” Jackson says.

Cesar Armendariz, 39, president of the Boyle Heights Chamber of Commerce, says that Boyle Heights doesn’t need any more liquor stores, but that it could use more food stores. Armendariz calls Boyle Heights “a food desert” — an area that lacks enough stores where people can buy a variety of fresh fruit and vegetables, dairy and meat.

Alcohol seems to be a topic that convenience store owners and employees aren’t eager to discuss. Four declined to be interviewed. One who agreed to an interview didn’t see a problem. “Since I’m near a school, most customers buy chips, soda, and bread, as opposed to alcohol,” says Bun Lin Hok, 24, who works in his family’s convenience store, J & M Market, across Fourth Street. He estimates that 40 percent of the store’s customers are students.

In South L.A., the South L.A. Community Coalition led a campaign to shut down problem liquor stores in the wake of the 1992 L.A. riots. Based on a door-to-door survey of 30,000 residents, the group identified alcohol vendors with high rates of alcohol and drug-related violence in and around their businesses, according to a report by the Oakland-based Prevention Institute. The coalition used a community-driven approach to shut down nearly 200 liquor stores and prevent the reopening of 24 problem stores destroyed in the riots.

Jackson encourages Boyle Heights residents who are concerned to contact policy makers too. “My own experience in dealing with politically elected leaders is if they hear it from enough people, they tend to take those demands and requests seriously,” he says.

But he urges residents to stick to one topic when voicing concerns: “It’s really important when you want to create change. Multiple requests create inaction.”

Click on the red pins to view liquor stores in each neighborhood map.