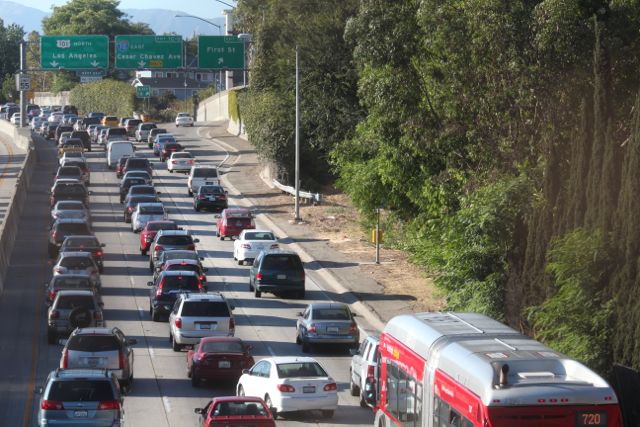 By Emmanuel Bravo and Erick Lujan

The streets of Boyle Heights have long been known for their dangers. In the past, this was due to gang violence and crime. But today, a less visible danger can cause serious adverse effects on health: air pollution.

Researchers are teaming up with community organizations and residents to raise awareness and to develop action plans.

Although Los Angeles has some of the worst air pollution in the nation, environmental advocates say Boyle Heights and other similar communities are “toxic hot spots” because they have more sources of pollution, such as refineries, auto body shops and rail yards, and are closer to freeways. Four freeways run through Boyle Heights ”“ Interstates 5 and 10, US Highway 101, and State Route 60.

Children living here have higher than usual rates of hospitalization for asthma. Boyle Heights’ 90033 ZIP code had an asthma hospitalization rate of 137.7 per 100,000 people in 2009, compared with a statewide rate of 86.2, according to the state hospitalization data.

“Every day more residents in Boyle Heights are being affected negatively due to the unsafe environmental conditions,” says Jorge Villanueva, an organizer for the East Los Angeles Community Corporation (ELACC).
ELACC has partnered with environmental organizations as well as UCLA and USC researchers to learn more about health issues caused by air pollution. Boyle Heights has about 16 schools and childcare centers.

Leticia Andrade, a Boyle Heights resident, has taken a series of workshops in UCLA’s ALERT program, which trains and educates community members about the latest scientific research on air quality. (ALERT stands for Assessment of Local Environmental Risk Training to Reduce Health Disparities.)

“I worry about the community, especially when it comes to children’s safety,” Andrade says. “That is why I participate and hope that my involvement can help out anyone in need.”

Andrade participates in research that involves measuring particles in the air, including dust and soot, at different times of day. She and other community researchers use particle counting devices, or p-trackers, which look like oversized graphing calculators and count individual particles dispersed in gas or liquid.

One afternoon this spring, a group organized by ELACC counted 381 cars and 12 trucks pass through the intersection of 4th and Boyle streets. The volunteers measured the particles in the air, and the data are being analyzed to see whether high particle levels coincide with heavy traffic. If residents know what times of day particulate levels are highest, they can limit their exposure by staying inside, Villanueva noted. 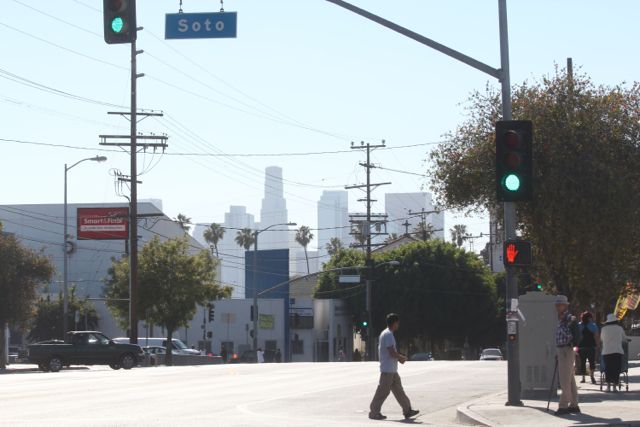 In other events called “ground truthing,” residents use clipboards and cameras to count factories and cars passing through the community, identifying potential sources of pollution. With data collected at the neighborhood level, community members are able to put the “science in the people’s hands,” say advocates.

Research over the last decade has shown the link between exposures to outdoor air pollution and asthma. The Children’s Health Study investigated the effect of air pollution on children’s health between 1993 and 2001 in 12 Southern California communities and found that children exposed to high pollution levels had permanently lower lung function. The study tracked the health of 1,800 children from 4th to 12th grades.

Boyle Heights was not studied. But Dr. James Gauderman, the study’s lead author, said he would expect on average “lower lung functions and increased risk of other respiratory conditions” among teens here. Gauderman is a professor at the University of Southern California’s Keck School of Medicine.

Gauderman’s research showed that children living within 250 feet of major roads were 50 percent more likely to have had asthma symptoms in the previous year. Children are more vulnerable to lung damage than adults, because they breathe 50 percent more air per body weight than adults and spend more time outdoors.

Numerous studies have shown that pollution exposure over time can increase the likelihood of heart attacks, stroke and irregular heart rhythms.

Pregnant woman exposed to air pollution have a greater risk of delivering infants with low birth weight, according to research done at UCLA and UC Irvine. And a 2008 study by the South Coast Air Quality Management District found that L.A. residents had the highest risk in the nation for pollution-caused cancers, with the very highest risk in low-income neighborhoods of color.

But not all the news is bad. Four schools in Boyle Heights, including Soto Street and Sunrise elementary schools, have installed new air filters as part of a pilot study implemented by the South Coast Air Quality Management District to reduce community exposure and related illnesses.

“If more of the larger companies take the initiative to update their technology, it’ll help us out everywhere,” says Villanueva.

“The residents are the voice waiting to be heard, and with them we bring more consciousness to improve our living conditions,” Andrade says.

Charles Patiño contributed to this story.