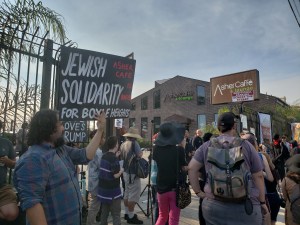 Over two dozen people showed up to a protest in front of Asher Caffé and Lounge Wednesday, including self-identified Jewish activists who responded to the kosher restaurant owner’s claims that a protest there last month was motivated by anti-Semitism.

The business on South Boyle Avenue near the 5 Freeway exit has been targeted by Defend Boyle Heights (DBH) and other local activists, who claim owner Asher Shalom supports President Trump’s anti-immigrant policies and that the café contributes to gentrification in the neighborhood.

Wednesday’s protest began at 4pm and was called “Jewish Solidarity for Boyle Heights,” according to a flier by Jewish Voice for Peace-Los Angeles circulated by groups affiliated with Defend Boyle Heights.

ATTENTION, COME OUT TO ASHER CAFE TODAY, JEWISH COMRADES WILL BE COMING OUT AGAINST WALL STREET ORTHODOX JEWISH CHAMBER OF COMMERCE HAVING AN EVENT AT ASHER! @DefendBoyleHts pic.twitter.com/3aqPi7ffBJ

The flier alerted that a group calling itself the Orthodox Jewish Chamber of Commerce planned to support Shalom and his business by holding a second “grand opening” event. The event was announced in an article published by a Jewish-themed, right-wing online publication.

Last month, the Boyle Heights Chamber of Commerce revoked Shalom’s membership after it found that he had retweeted anti-immigrant posts from a Donald Trump fan page and from the president himself. The revelation prompted a July 12 protest by Defend Boyle Heights.

A week after the protest, Shalom and his son, David, appeared on the television show Fox and Friends, claiming that protesters were marching outside his café “because of supporting Trump, because it’s kosher, and because they don’t want anything nice and successful in Boyle Heights.”  In an interview, Shalom’s daughter claimed that protesters threw feces at the new restaurant, an assertion that has never been corroborated.

In an interview for the Boyle Heights Beat podcast Radio Pulso, DBH activist Angel Luna denied that activists at the July 12 protest uttered anti-Semitic chants, as has been reported in some right-wing media.

Nancy Meza, a volunteer organizer with Defend Boyle Heights, said Wednesday that the claim by Shalom that the protesters are anti-Semitic is untrue.

“We’re calling bulls..t on the idea that protesting a Trump-supporting business involved in gentrification that happens to be Jewish, makes us anti-Semitic,” said Meza. “We don’t stand for anti-Semitism. We are going to stand with immigrants and with our Boyle Heights Community and not let the fact that he’s jewish stop us from calling him out.”

In a press release sent out Wednesday morning, Defend Boyle Heights said that “it is dangerous to make these false accusations, when actual anti-Semitic beliefs are peddled by Proud Boys and other white supremacist, neo-Nazi organizations who are becoming more active in Los Angeles as a result of Trump’s policies and popularity.”

Shmuel Gonzales, who said he attended the protest as an observer, said that Asher’s tone-deaf response to the protests further fueled the community to rally against him.

“It was disingenuous for Asher to go on television and say he didn’t understand what this manifestation was,” said Gonzales, who frequently writes and posts about his Jewish-Latino heritage. “He said he didn’t understand what coffee has to do with politics. This community has a history of racial tensions and I worry that putting a finger in those sore issues could trigger some bad things in this community.”

Protesters chanted “hey, hey, ho, ho, Asher has got to go,” “el barrio no se vende, se quiere y se defiende,” “gentry get the f*ck out” and, at times, “f*ck the police.” No anti-Jewish, homophobic, or racist chants were heard.

Lieutenant Ryan Whiteman with Los Angeles Police Department Hollenbeck Division said that LAPD officers were present as a “preventative measure” and that they have been following the issues with the café since it opened.

“Because we have had an issue in the last month with protesting, we wanted to come out and provide facilitations for both sides,” Whiteman said.

Police officers formed a line to prevent protesters from crossing into the Asher Caffé parking lot. Although there were no major incidents, there were several tense moments, including a verbal exchange between the protesters and police when a protester attempted to cross the barricade to retrieve her car. Whiteman helped deescalate the situation and escorted the woman to her car without incident.

While most of the protesters were content with the chants and the general tone of the rally, Gonzales said he did not agree with the tactics.

“They chose to use vulgarity and intimidation instead of reaching out to a religious group of people with a little bit more respect that they’re more likely to listen to and be able to understand,” he said. “It’s understandable that when people are being yelled or cursed at, that they can perceive that as anti-Semitism, but I don’t think that was the tone of the entire group.”

But Meza disagreed. She said the tactics utilized by Defend Boyle Heights and its supporters are necessary to combat gentrification and anti-immigrant policies.

“Some people see this as picking on a small target,” Meza said. “But it’s important that people with destructive ideologies don’t feel comfortable coming into our neighborhoods because there are immigrants and undocumented people here in Boyle Heights. And Asher being here directly impacts their lives.”

Despite the back and forth, the vulgar chants and the tension, Whiteman said he remains hopeful that future protests may relieve tensions between groups on both sides of the gentrification issue.

“I was at the previous four Defend Boyle Heights protests [including some against other establishments] and we never had any type of dialogue,” said Whiteman. “Today there was some at the end and I’m hopeful that for a future protest there can be increased dialogue.”

Asher Shalom and his son were seen leaving their café at approximately 5:45 pm, after which some protesters taped their signs to Asher Caffé’s new ‘Happy Hour’ sign hanging from the parking lot gates.

And added tape so it read, “NO Happy Hour.”

All photos by Marco Covarrubias