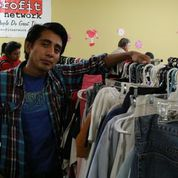 Every Thursday, mothers with strollers, men, young and old, sift through shoes, school uniforms, jackets and books inside a mint green building on 4th and Gless streets in Boyle Heights.They’re not shopping at a mall or even a swap meet. The second hand clothing they carefully choose is from A Trabajar (To Work), a clothing bank that opens its doors weekly to offer free clothing to needy families in Boyle Heights and the surrounding areas.

On a lucky day, 22-year-old Jairo Pérez found a pair of boots, perfect for his job as a waiter. He estimated that buying the same pair of boots at a store could’ve cost him $75.

“Thank God I found what I needed,” says Pérez who learned about the center last year after he was laid off and was alternating between living on the streets of Boyle Heights and at friends’ homes.

For people like Pérez, programs like A Trabajar save money in a tough economy. The new clothes also gives them a boost of confidence as they look for work, continue school, or try something new, such as volunteering.

An undocumented worker from Perú, Pérez was tempted to use drugs and alcohol while he was looking for work. He needed something to motivate him to get off the streets. The program, he said, came at a perfect time.

“I didn’t have a lot of money so a friend told me I would find a lot of things here,” said Pérez. “Since I work at restaurants, I need things like slacks, dress shirts, boots for work.”

A Trabajar began as a special clothing bank held several times a year, organized by Plaza Community Services, a non-profit

organization that offers programs seeking to help Angelenos in need.

But the occasional events weren’t enough for many who were out of work or homeless, and benefited from the free clothes, says Gabriel Buelna, executive director of Plaza Community Services.

“People, after the events, kept calling for clothing, and [were asking] months afterwards, ‘When’s the next event?’,” Buelna said.

Last August, A Trabajar was added to the various programs offered by the organization, next to childcare, substance abuse programs, and domestic violence classes. Over one hundred people crowd the center weekly and are allowed to get five free clothing items each for themselves and their families, no questions asked.

Even though unemployment rates are decreasing in Los Angeles, many Boyle Heights residents are still struggling to find work.

With four kids to support, clothing is a necessity that often becomes the lowest priority after food and rent. Free clothing is something that definitely helps, Jiménez says.

“We don’t have money to do laundry every week so we need more changes of clothes to stretch out our money a bit more,” says Jiménez.

Gabriel says stories like this aren’t uncommon. He saw this, and wanted to help people out of work get jobs and save money.

“When you empower women, you’re also strengthening her family as well as her community,” says De Asis about the value of programs like A Trabajar and Dress For Success.

Jiménez herself, admits that the clothing she receives boosts her self-esteem. “It’s definitely helped a lot,” she says.

Even though both programs help improve confidence, the way they attract clients is different. At Dress for Success, they require a referral and a job interview to already be scheduled before providing help.

Things are run differently at A Trabajar, where there is no need for referrals. This, Buelna says, is because he believes that it’s a better experience for the people who go there.

“I don’t want to ask too many questions because I think that if people know that they’re not going to be bothered, then they’re happier,” Buelna explains.

That’s something Pérez learned after he became a volunteer at the center four months ago, where he sorts clothes and prepares for the weekly event.

“I like to help because I like to distract myself and talk to people like me who are in the same situation, looking for work and I want to help them,” says Pérez, who is now employed as a waiter, wearing dress shirts and other clothing he found at A Trabajar.

Buelna says that is the goal of A Trabajar, to motivate people to better themselves and give back to others.

Opens every Thursday from noon to 4 p.m