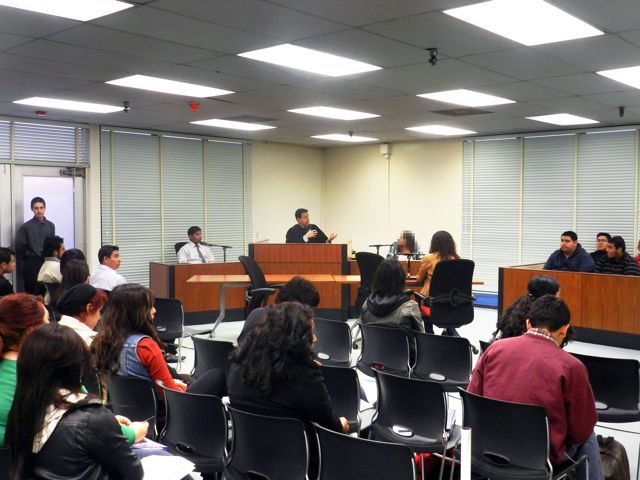 “All rise. Teen Court at Roosevelt High School is now in session,” the bailiff announces.

A black-robed judge sits at the front of the room, and a prosecutor, a clerk, and a jury of 12 wait expectantly. Although the setting resembles a courtroom, it’s a classroom at Theodore Roosevelt High School used for Teen Court.

Teen Court operates as an alternative to the criminal justice system, giving young offenders a chance to be judged by their peers. Teen volunteers determine sentences for youth convicted of committing crimes. While youth who go through Teen Court face consequences, they are saved from criminal records that could follow them for life.

Teen Court is in its fifth year at Roosevelt. Carlos Castillo, a social studies teacher at Roosevelt’s School of Law and Government, runs the program, and student volunteers staff it. “My main duties are to make the schedule and prepare the kids for the trials,” says Castillo.

Only first-time offenders involved in non-violent or non-threatening crimes are eligible for Teen Court. This includes offenses such as petty theft, vandalism, and simple battery””such as pushing or physical fighting during school. If the defendant is between 12 and 17 years old and if a guilty verdict would not carry a fine of more than $500, a youth can opt for Teen Court instead of facing trial in a downtown courthouse.

Everyone Can Benefit
Juvenile defendants don’t attend the Teen Court in their own schools because, as in the regular court system, they can’t be judged by people they know. During the trial, the judge and the jury question them, and then decide on whether the accused is guilty, and, if so, what the sentence should be.

Castillo says everyone can benefit from the experience, “The offender gets a second chance, and the students get the experiences of a real case,” he says.

After school on a Wednesday last semester, a defendant and her mother walked into the room with their heads down, avoiding eye contact. “I felt embarrassed,” said the mother of the defendant, Patricia, a 16-year-old who is home schooled.

Patricia was arrested for stealing a designer makeup foundation from a J.C. Penney store. She admitted taking it without paying. If not for Teen Court, she would have faced a misdemeanor charge in adult court. Patricia says she is grateful to have avoided a real courtroom and a criminal record. “I’ve never been to real court, and I didn’t want to experience it,” she says. “This was like a second chance.”

Her peers sentenced her to 35 hours of community service, which she had six months to complete. She also was asked to write a letter of apology to her younger sister, who was with her when she committed the crime and then caught.

Creative Sentences
If a majority of the jury of 12 finds a defendant guilty, the teens themselves decide upon consequences, such as community service, letters of apology, individual counseling, or family counseling. Sentences can be creative. For example, a youth convicted of tagging might be required to take an art class. The sentences are aimed at keeping the offenders busy and out of trouble, as well as matching their interests.

Judge Jose Sandoval is one of two judges at Roosevelt’s Teen Court, where he hears cases twice a month. Judge Sandoval, who grew up in East Los Angeles, knows the challenges young people here face. Teen Court “isn’t about embarrassing you,” he says, “or about public shaming like you are a bad person.” The focus is not on “how you punish them, but on how you will help them,” says Sandoval.

Judge Ray Santana, another Roosevelt Teen Court judge, grew up in Boyle Heights and attended Roosevelt. He believes Teen Court offers a more positive solution to juvenile offenders because family members and peers are involved. “When the community is involved, it is more likely that the person will learn from their mistakes,” he says.

When a defendant participates in Teen Court, the probation department does not file charges with the district attorney. Delores Bryant, Teen Court’s supervising deputy probation officer, says the program’s intention is to give youth the benefit of the doubt and a chance to learn from the experience. ”It’s holding them accountable and making them responsible,” she says. Bryant says a community service sentence provides a way for the youth “to give something back to the community”¦ and have more respect for their community.”
Bryant says that 95 percent of teens in the program do what’s asked of them during their six-month probation periods and avoid criminal convictions. The other five percent get in trouble again or fail to complete their sentences and receive a conviction.

Program advocates say offenders’ negative behaviors improve after being judged by their peers. Local Teen Court’s probation officers lack the resources to follow up with the teens after they complete their six-month sentences, so it’s not known if the program really serves them in the long-term. Other studies have shown positive results.

Seventeen high schools participate in Teen Court in Los Angeles County. In California, there are nearly 70 youth courts, and there are 1,050 nationwide, according to the National Youth Court Center. All youth court programs are run differently. Some are community-based, some are school-based, and some are based in the juvenile justice system. But the basic principle is the same””to give teens an alternative to the juvenile justice system.