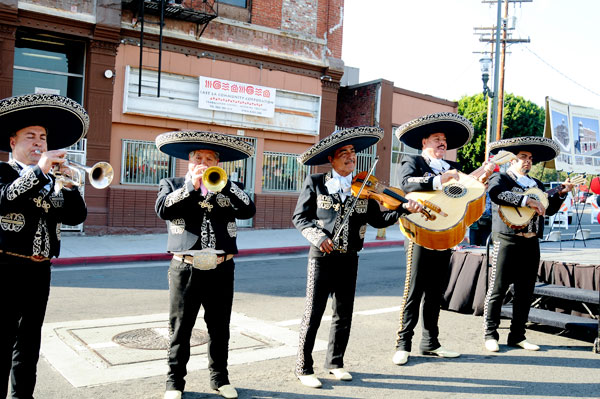 Even on a dark, cold and rainy day, the mariachis gather on sidewalks and in the middle of the streets along Mariachi Plaza to attract passersby and drivers. Many of the mariachis are dressed in their charro outfits as they hand out business cards to passing motorists. But few people stop to listen to them. Guitar player Sergio Olvera has come to his same spot at the plaza for the past 15 years. He feels that he needs to be there. “Work does not come to us if we are at home,” he says.

The mariachis have had a presence in Mariachi Plaza since the 1940s. The strumming of guitars, the blare of the trumpets and the sound of men singing still fill the air here. But making a living has never been easy for these musicians, and these days it seems to be getting even harder.

Even after spending days at the plaza, most mariachis only get gigs during the weekends. “I feel lucky even if we get hired three days out of the week,” says Pedro Trujillo. His group often makes just $100 a day, he says, which has to be split among all the members.

Not only has the number of working days decreased, but also the number of hours.“About four years ago, we would get hired for up to 10 hours [a day]. Now the clients only want us for one or two hours,” says Joel Arriaga, an accordion player.

Anita Castellanos, a longtime resident and property owner, was born in a house next to the plaza and has seen many changes over the years.

She recalls when the mariachis first started gathering on the corner of First and Boyle to look for clients. “The kiosk used to be a gas station,” she remembers. “Way back then, the owner of the gas station gave permission to a couple of the guys to [look for] jobs. He was thinking that he could get them to buy cigarettes.”

Over the years, the plaza has become famous for mariachis. “People don’t go to Olvera Street for mariachis,” says Castellanos. “People come to Boyle Heights, to Mariachi Plaza.”

But these days, not enough people are coming, and the mariachis struggle to get by.

Castellanos has noticed the decrease in the number of groups in the plaza. “It has to do with the economy,” she says. “No one wants to pay $50 [for the mariachis] to sing ‘Happy Birthday.’”

While there is no set rate for their work, groups charge $40 to $50 per hour, depending on how hard clients negotiate the fee.

The decline in demand and their continued need for work have caused a rift among the mariachis.

“There is definitely competition. The group that offers the best bargain is the one who gets the job,” says Jose Luis Aceves, a guitar player.

Victor Manuel, who studied at the Southern California Conservatory of Music, is not a typical mariachi. Although he can be found in the plaza, he charges more than average and is usually hired by bandleaders.

He says hiring is not based on talent, as it once was. “The quality is wiped out,” he says. “Good mariachis are an endangered species.”

Manuel has witnessed a change in the time that the mariachis put into their music and the dedication they feel. Often, he said, their attitude is that they are “just going to work just to do the job.”

Because of the slow economy and the need to support families, many mariachis are forced to look elsewhere for part-time work.

“When I see that the mariachi business is not going well, I look for someone to hire me in the construction business,” says Aceves.

They take on jobs such as painting houses and doing minor construction work, but still do not consider giving up their music.

Olvera, who has 10 brothers who play guitar, is a third-generation mariachi. His father was a musician in Mexico.

He feels honored to keep that part of his culture alive.

Although mariachi life can be difficult, most feel the only option is to keep on playing.

“We come here because the mariachi culture is beautiful. It is an addiction. We need to feel
good by playing music,” says Olvera.