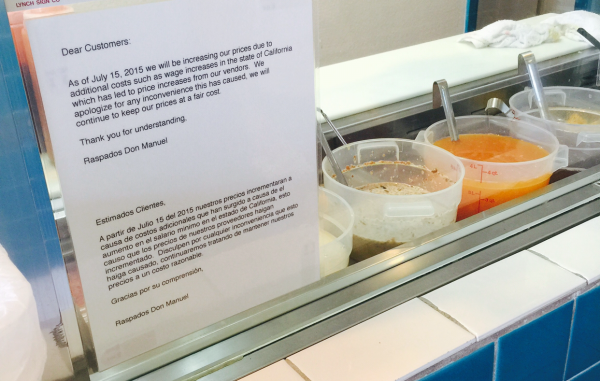 Efforts are under way to make $15 hour the new minimum wage in all of California. In June, Los Angeles became the largest city in California to adopt the higher standard, followed in July by the county of Los Angeles. And now, two powerful labor unions are gathering signatures to place separate pay raise initiatives on the November 2016 ballot.

In the city of Los Angeles, the increase from $9 an hour to $15 an hour will take place over the next five years.

While raising the minimum wage is intended to help lower earners make a more livable wage, the change also affects employers and the entire community.

In a community like Boyle Heights, where the median income is $33,000 a year, raising the minimum wage will have more far-reaching impacts than elsewhere.

While an increase in wages may benefit many local residents, it will also result in higher prices for some products and services. Some area businesses are already raising their prices because of the higher wages. Advocates for low-wage workers argue that given increases in the cost of living, $15 is not even close to being a livable wage in a city like Los Angeles. And economists are unsure of how the increase will impact higher wage earners or the underground economy. 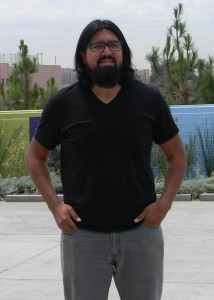 Boyle Heights Beat spoke to José A. Fernández, tenant services manager at the East LA Community Corporation, which was one of the local community organizations that led the campaign to raise the minimum wage.

Boyle Heights Beat:  Why was it important to raise the minimum wage in Los Angeles?

BHB: How will workers benefit from the minimum wage increase?

JF:  Families are going to benefit from an increase in wages and a move towards economic stability where they are able to meet their rent, their transportation needs and their food needs. Increasing the minimum wage will provide a greater opportunity to become more economically stable and achieve some of the goals they have for their families and themselves.

JF: Unfortunately, different economic studies have shown that $15 is still not enough, at least not in the city of LA. I think it might even be double.  In regards to housing, we want to make sure that families pay no more than 30 percent of their income towards housing on a monthly basis. Fifteen dollars an hour is still not on par with the cost of living.  Even at $15/hour, some families will go homeless.

BHB: Some business owners say the increase will result in higher prices and force them to lay off employees or go out of business. How do you respond to that? 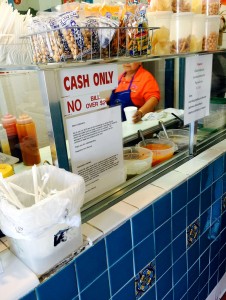 A Boyle Heights business announces it will raise prices because of the minimum wage increase.

JF: It’s a difficult and complicated situation. A lot of small and local businesses have thrived for a long time paying people at minimum wage or below. Meeting the new minimum wage requirement will put them in a difficult situation to decide how many employees they can sustain. I have also seen announcement on doors or buildings (of local businesses) saying due to the minimum wage ordinance, prices are going up. That’s one way to offset the wage increase, by increasing prices. The idea is with increased wages, people can afford more expensive items.

Employers need to figure out how to balance their profits and their outputs. Employees that are full time now could get impacted down the line, by getting their benefits taken away. Some employees are being placed on part time so employers can skip on benefits and overtime.

BHB:  Many workers in Boyle Heights are part of the underground economy. How are they affected by the minimum wage increase?

JF:  It’s difficult for those employees that aren’t legally working. It’s a real challenge because there are not labor protections. We might see a lot of these employees still earning $8-9 an hour. That’s the nature of the informal economy. Employers feel that the law doesn’t apply to them. It’s going to require a lot of work by organizations to make sure informal economy employees are getting the wages they deserve.

JF: My hope is that after 2020, and after years of studying how it has helped families, that there is enough research to show that $15/hour is not enough. I’m hoping the city of Los Angeles can increase the minimum wage to be a living wage, an honest living wage where people don’t have to decide between their housing, their transportation, their kids’ education or the food they need to put on the table.