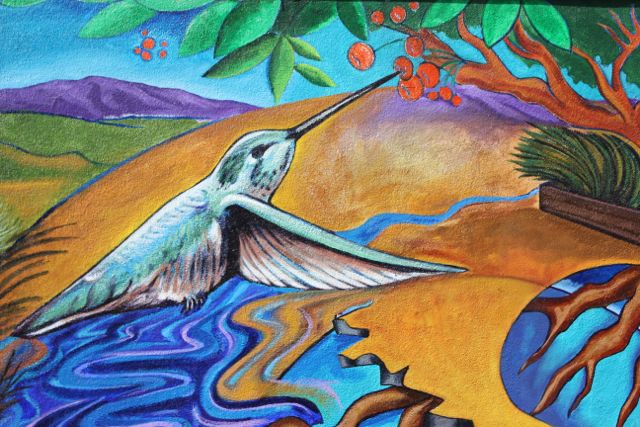 A mural at Theodore Roosevelt High School painted by members of UPPA and students last spring. / Photo by Andrew Román

Last October, a group of artists, scholars and art lovers gathered in the home of Raul González, a muralist in East Los Angeles. They spent the entire night in serious discussion, debating, questioning and expounding upon what they saw as the city’s unjust removal of murals from private property. By the time the sun rose, United Painters and Public Artists (UPPA) had been born.

UPPA was formed to protect Los Angeles murals and stop their whitewashing, to prevent the penalization of the artists who paint them, and to help craft a new city mural ordinance. The group aims to create a community of artists who support and help each other and foster collaborative work.

The group is all about “people hooking up, people working together on murals, [creating] proposals for working together,” explains Lisbeth Espinosa, social art historian and UPPA co-founder. “So it’s like this huge familia, but it’s all diverse.”

That “familia” provides support and an environment for young artists to learn from older, well-known muralists, many of whose famous murals grace walls in Boyle Heights and East L.A. Support can be legal, artistic or even personal.

UPPA has recently stepped up its activities and has been especially engaged in Boyle Heights. This spring, Espinosa and Susanna “Sonji” Elise, an artist, visited Theodore Roosevelt High School to lecture on what they believe is a flawed mural policy. On the Harvey Milk Day of Service, they joined UPPA co-founder González to help create two new murals at the Roosevelt High School student garden.

The group has devoted special attention to the historic murals at the Estrada Courts apartment complex, which are closely tied to the Chicano movement in Boyle Heights during the 60s and 70s.

Estrada Courts Murals
Late one windy afternoon last spring, Espinosa slowly wandered through the apartments off 8th Street, as if she were in a museum. Almost every building block in the complex is painted with a mural. Some of the murals have sociopolitical messages, some shows scenes from nature, and some highlight Chicano pride. These murals have been the backdrop of Estrada Courts residents’ lives since the 1970s.

Espinosa wasn’t just enjoying the art. She catalogued every painting to ensure that the original artists are properly credited, another UPPA goal. UPPA also hopes to be involved in restoration of the murals.
“I know the power…how the mural can give this [community] hope and how it gave me hope in those difficult moments,” she said.

Meeting biweekly, the collective is working on getting City Council approval for a new mural ordinance, which members hope will breathe new life into the local arts community.

The Mural Ordinance
Los Angeles was once called “mural capital of the world,” partly because a 1986 ordinance that regulated public signs provided a blanket exception for outdoor murals. But everything changed in 2002, when lawsuits brought by advertising companies caused the city to ban murals on private properties (though they are still allowed on publicly-owned buildings, such as libraries and transit stations).

The lawsuits argued that if private businesses were allowed to commission murals without regulation, billboard companies should be, too. To settle the dispute, the city eliminated the distinction between signs and public art, effectively making most murals on private property illegal.
As a result of the ban, hundreds of murals were destroyed or whitewashed, including works created by some of the city’s best-known artists.

Since then, city officials have attempted to craft an ordinance that would differentiate artistic creations from advertising so that murals could again be painted on private walls. Last October, the City Council instructed the planning department to draft a “vintage mural permit” to protect and preserve existing murals and a separate permit to enable the creation of new murals.

That was one of the catalysts for the birth of UPPA.“[The creation of UPPA] was actually a reaction to the lack of information,” says González. Until this year, he says there was little information about the city’s plans, and much of it was not credible.”

City Councilman José Huízar has taken up the cause, organizing a series of workshops with artists, arts organizations, and hundreds of stakeholders to elicit feedback on the proposed ordinance. Last December, he joined with local muralists and the departments of planning and cultural affairs at Self-Help Graphics to announce the release of the “discussion draft” of the mural ordinance.

At the July 12th meeting of the City Planning Commission, officials unveiled the draft mural ordinance for public commentary. The draft immediately sparked controversy, with the UPPA muralists voicing their opposition to several new permit requirements that would make it more difficult to install murals.

Faced with strong opposition, the City Planning Commission failed to reach consensus and will revisit the mural ordinance on September. 13. UPPA, meanwhile, continues to work side by side with muralists and policymakers to create better policies for murals and the muralists who paint them.