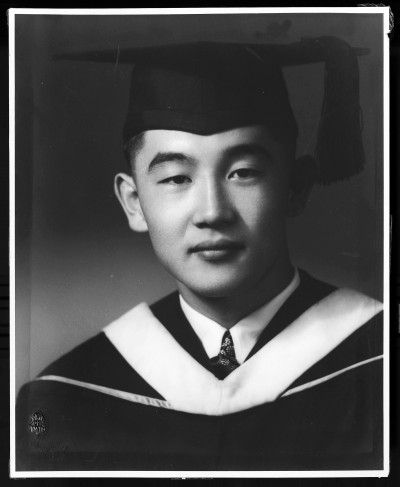 Cedrick M. Shimo, 91, walks slowly through the front gate of Theodore Roosevelt High, his back bent, with a shuffling gait.

“Did you know Coach Galindo?” he asks the first person he meets, in a whispery voice. To the “no” reply, Shimo launches into a story about the glories of his old team. That was back when Shimo, a 1937 Roosevelt alum, was the bat boy of the Roosevelt baseball team.

Shimo, charming, gray-haired, and formal in a suit and tie, seems out of place among all the high school students. But as he talks, he is back in the Boyle Heights of the mid 1930s, when baseball was everything to him, just as it is for many boys in Boyle Heights today.

As he walks down the corridor, he doesn’t recognize his former high school, which had only one building when he attended. He calls his youth in Boyle Heights “the happiest time of his life.”

He says Boyle Heights was like no other community, contrasting it with New York, where people of different races and cultures each had their own small ghettos. “You see, New York was separated,” says Shimo, with great conviction. “Here we were all mixed. We were all together. Boyle Heights was an unusual multi-racial community.”

At that time, the biggest immigrant group in Boyle Heights was Eastern European Jews, but the neighborhood also had Japanese, Caucasians, and Latinos living there. Today, Boyle Heights is more homogeneous and is 94 percent Latino.

The Boyle Heights of Shimo’s youth was a different place, in many respects. Shimo grew up on Third Street, less than a block from Evergreen Park. He says that the park back then was nothing but a pile of dirt. There was no playground. He remembers an auditorium where his father would hold martial arts classes. Now, the park is green with a baseball field.

Boyle Heights helped Shimo develop a sense of who he was, both Japanese and American. It’s a juggling act many of today’s Boyle Heights’ youth also perform.

Shimo’s father ran a martial arts studio, and his mother taught at a Japanese school. His father taught him the samurai code, which consisted of honor, respect, and always trying your best to find your way out of a situation that involves conflict. Shimo ate Japanese cooking at home and American food on the streets. Baseball meant everything to him.

“The main thing on my mind was to try to be the bridge between Japan and America,” Shimo says. He loved both countries, he explains. And, without a doubt, he loved the culture of being Japanese and the freedom of being American.

He belonged to a Boyle Heights club called the Cougars, a Japanese-American baseball team that formed when he was still in middle school. 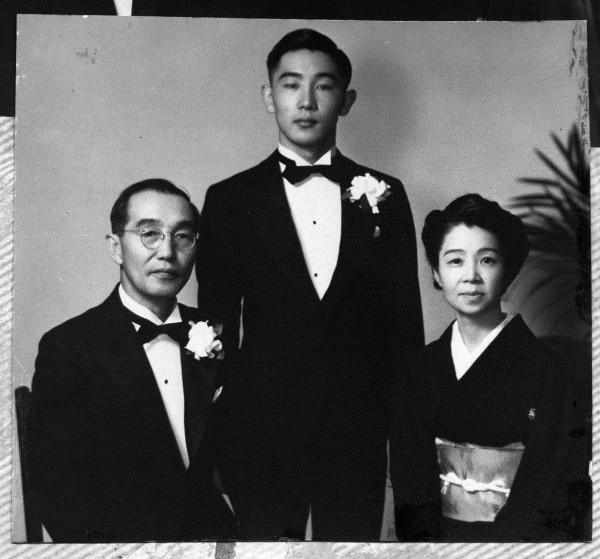 Daniel Kawahara, a teammate, has known Cedric for nearly 80 years. Kawahara says that their love for baseball was so great that any open field would mean a game. “We used to practice at Hollenbeck Middle School. We had all the open space.”

The men still get together weekly, and both attend reunions of the Cougars, though many of its alums have died.

After graduating from Roosevelt, Shimo went on to major in economics at UCLA and to attend graduate school at UC Berkeley. It was there on the day after the Pearl Harbor attack that he received a letter informing him that he was going to serve in the Army. As a Japanese-American, he was not permitted to board a train and had to hitchhike to Los Angeles to report to his draft board. After joining the Army, Shimo volunteered for the Military Intelligence Service Language School, along with many other bilingual Japanese-Americans.

During this time, Shimo’s father was imprisoned because of his martial arts background. Shimo’s mother, like many Japanese living in Boyle Heights, was forced to live in the Manzanar Relocation Camp, where the United States imprisoned more than 100,000 Japanese during World War II.

After a three-month training program with the language school, Shimo applied for a two-week furlough so he could go to Manzanar to bid farewell to his mother before shipping out. His application was denied, because Japanese were not allowed to travel to the West Coast. When he complained, he was expelled from the intelligence school and placed in the 1800th Engineering General Service Battalion.

Shimo says the battalion was composed of American soldiers of German, Italian, and Japanese descent who were considered troublemakers and whom the Army wanted to keep under surveillance. Instead of becoming an intelligence officer, he built and repaired bridges. Shimo served two years in the battalion and was honorably discharged.

In a speech that Shimo gave last year about that chapter of his life– and America’s””at the Presidio Officers Club in San Francisco, he described how he felt at the time, and what the experience taught him. He said, “At one time in 1942, and 1943, I felt that my country had abandoned us—treated us as a Japanese enemy instead of as an American. Today, as I look back, I can only marvel at the innate greatness and goodness of America. This experience has forged us into becoming better Americans.”

After the War, Shimo moved back to Boyle Heights and to his old neighborhood. He went on to work for a Chinese import company, and later became a vice president of the export division for Honda. After retiring in 1989, he became a weekly volunteer at the Japanese American National Museum in downtown Los Angeles.

Although Shimo moved away, Boyle Heights always remained important to him. At the museum, he asks to lead the Roosevelt High tours, because it brings back fond memories. He hopes to move near his old neighborhood and has applied for admission to a retirement home near Hollenbeck Park.

As he reflects back on his long life, he recognizes how growing up in Boyle Heights shaped the person he would become, “Looking back, I realize it was not normal, but an unusual environment that did not exist elsewhere. I believe that was the reason for my not being racially intolerant. It made for a most harmonious and happy life style.”

Do you know of an interesting Boyle Heights person we should profile or who you would like to write about for our online edition? Please send us a text message of any length at 323-834-9752; email us at [email protected] or write us a letter.