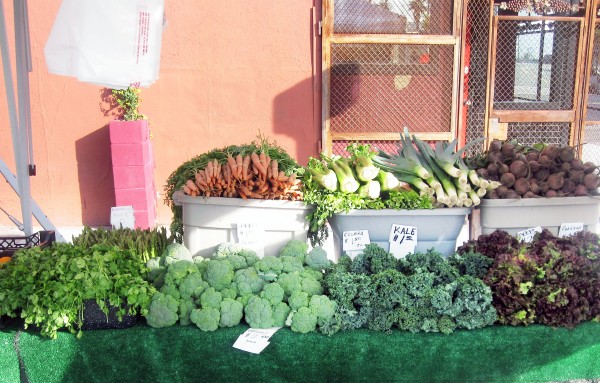 As you walk on First Street towards Mariachi Plaza, you hear a heavy bass accompanied by a soothing electronic trance. Before you know it, a soulful, spirited jazz is mixed in with a fast-moving cumbia. As you get closer, you smell the mouthwatering carne asada, appetizing pupusas, and a heavenly scent of teriyaki chicken. Once there, you see the rainbow-colored stands full of jewelry, fruits, and vegetables. What was once an empty plaza is now populated every Friday afternoon from 3 p.m. to 8:30 p.m. by the Boyle Heights Farmers Market.

The market, launched last summer, got its start in part because of the efforts of Juan Romero, owner of the Primera Taza Coffee House, Councilmember José Huízar and Toni Júarez, a business woman, who now manages the market. Since its opening, the market has more than doubled in size — to 28 vendors from 12 — and it is now two vendors away from reaching its 30-vendor limit.

A Market That Sustains Itself

Though there have been seasonal swings in customer visits, the farmers market and its vendors are still making money. “Other markets around this time [of year] are not really turning a profit. Ours luckily is”¦ and is sustaining itself,” Romero said during an interview on an overcast spring evening.

The weather plays a major role in whether customers come, more so than the increase in vendors or the variety of produce, prepared foods, and trinkets.

“During the winter time, we face a 50 percent decrease,” said Romero “but during the summer time or warm weather, we see an average of 300 people at our market.

The market expects to see a major increase in business, because of plans to accept coupons from the government’s Women, Infants, Children (WIC) program. “They will be called Farmers Market WIC Coupons,” says Romero.
Community members play a big role in the market’s fortunes. Many people visit the market during these tough times because it is fairly cheap.

Affordable Entertainment part of its Appeal

“Parents like to take their kids out, but due to the way the economy is nowadays, can’t afford to do so. By coming to the farmers market they have fun, get entertained, enjoy traditional foods, and, best of all, they need little to no money to come out,” said Juarez, the farmers market manager.

Consumers say the farmers market has benefitted the neighborhood.

“It brings the community closer together; it allows people to know more about the community. The food, the music, the arts, and the people that gather here bring out more people,” said Tino, a loyal shopper who has been going to the farmers market since it opened.

The market has helped out some local families economically, including María De Jesús, a vendor, and her disabled grandson. She sells knitted items that range from scarves to beanies. She said that her teen grandson had recently suffered a heart attack and stroke, leaving him mentally incapacitated. Now, she depends on the farmers market for extra income to help pay for her grandson’s treatment.

“During the day, while I tend to my grandson’s needs, I see no point in watching television. I love knitting, and I do it in my spare time,” she said in Spanish. “Due to the economy and our family situation, I am not able to put up a store. Luckily, Toni gave me the opportunity to put up a stand free of charge so I could help out my family with a little money.”

The market attracts some interesting characters. The phrase “it takes money to make money” is taken literally by Alba Melgarejo, a vendor who brings a unique twist of creativity and individuality to her stand.

She sells origami made from money. A miniature t-shirt made from a dollar bill is sold for $2, with profits going to Interval House, an organization that fights domestic violence. By selling her artwork, Melgarejo hopes to inform customers of the harmful effects of domestic violence.

Like Melgarejo, performers at the market vie for customers’ attention with their unique music styles. The entertainers not only enhance customers’ enjoyment of the market, but also expose them to different genres of music and dances.

“It is fun for all ages,” said Neil Denezio, a teacher at Apex Rockstar Academy who arranges the entertainment. “It’s open to anybody.” The musicians aren’t paid, but Denezio said that   some vendors give them free food.

With its first anniversary just around the corner, the farmers market is still in its infancy. Some Boyle Heights residents feel the community needs to visit the market more often so that it becomes a permanent establishment in Boyle Heights.