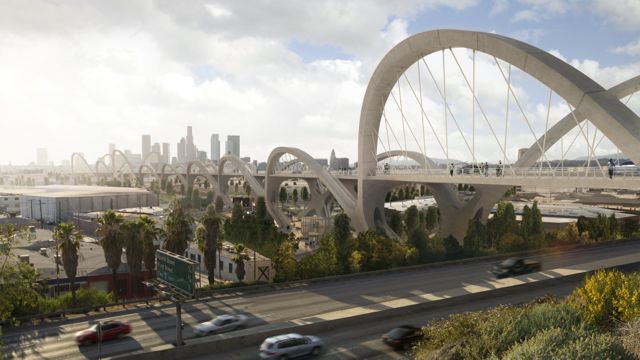 Image of the winning design. Courtesy of HNTB

Manuel Sandoval, like thousands of Boyle Heights residents, uses the Sixth Street Bridge every day to get from Boyle Heights to downtown Los Angeles.

Soon, however, Sandoval’s commute will change. The 80-year-old concrete and steel bridge is damaged beyond repair and will be replaced with a new, modern bridge at a cost of $401 million.

This Los Angeles gateway spreads its recognizable double arches across the Los Angeles River. It has appeared in many movies, including “Terminator 2,” “Grease” and “In Time,” as well as in Kanye West’s and Madonna’s music videos.

Designed in 1932 by architect Merrill Butler, the historic bridge began having problems only 20 years later when the cement started to disintegrate due to alkali- silica reaction. It has been found to be unsafe and could collapse during a major earthquake.

Demolition will begin in 2015, and the rebuilding project will take about four years. The bridge’s famous four arches will be incorporated into the replacement’s design. “I like that it has the arches,” said Sandoval. “That pays homage to the old bridge, but I like that it’s a new forward architectural design. It’s something that our neighborhood doesn’t have very much of.”

HNTB, an architectural firm in Kansas City, won an architectural competition for its proposed design “recognizing the future but also respecting the past,” said Víctor Martínez, the firm’s vice president.

More than a bridge
HNTB wants the bridge to do more than just connect Boyle Heights to downtown Los Angeles. The architectural firm also wants to connect the Eastside to the rest of the city “and not just provide a connection from east to west, but probably go from below to above and bring these two communities together,” said Martínez.

Last April, then Mayor Antonio Villaraigosa and Council Member José Huízar announced the international design competition for the Sixth Street Bridge. Huízar said they wanted “to create a bridge that will make all of Los Angeles proud.” The City selected three finalists from nine proposals: HNTB, AECOM of Los Angeles and Parsons Brinckerhoff of New York City. A committee of 15, selected by Huízar and Villaraigosa, reviewed the designs.

Ozzie López, executive director of the Boyle Heights Technology Youth Center, a committee member, sought feedback from the community before he made his decision. “Community members wanted to make sure that the bridge kept its local historical features,” said López.

Goal: spark activity
The new bridge design includes walking and biking paths, a park and an arts plaza below, which may have restaurants and businesses. The goal is to inspire business and activity and create a lively, active area for the community.

Michael Maltzan, a local architect who worked with HNTB on the design, had the “perfect answer,” said Martinez of HNTB. “If you have a project that a lot of people come to,” he said, “you have a secure area. Things happen, whether graffiti or whatever, when there’s not a lot of activity, when there’s no lights.” One of the firm’s goals was “to draw business in, to draw activity in,” he said.

While Sandoval likes to ride his bicycle across the Sixth Street Bridge, he thinks the traffic makes it very dangerous. HNTB created bike paths after hearing the mayor’s and Huízar’s stories about riding their bikes across the bridge as children.

The demolition and reconstruction of the heavily trafficked bridge will create more congestion in the streets of Los Angeles. The bridge serves as the main route to work and activities downtown for many local residents, including Sandoval. Before the city demolishes the bridge, it will first improve 21 nearby intersections that will face more traffic during the four years of construction.

The city council approved a $30 million contract with HNTB in March.

The project could create as many as 5,000 jobs. López proposes that the city should start to train local workers to build it “so that the money can be reused in the local community and can be an economic boom.”

Music Videos in which it’s featured