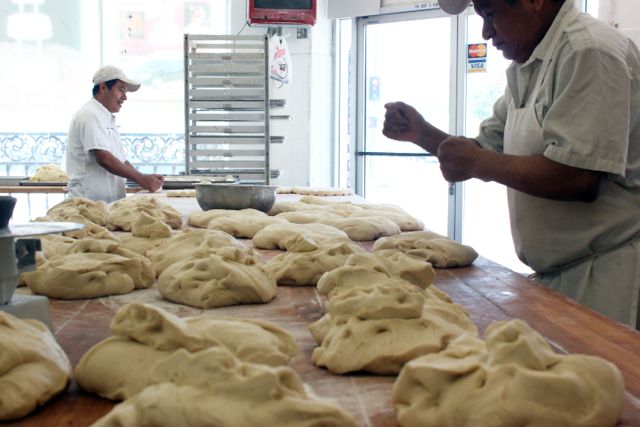 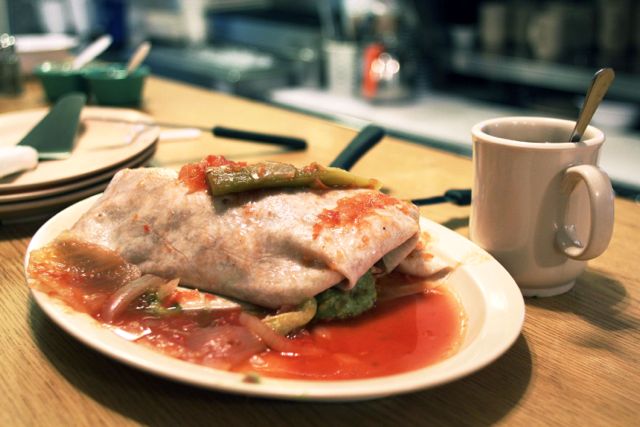 From the unconventional five-pound burritos to delicious sweet bread, Boyle Heights is known for its tasty and diverse foods. Its popular restaurants have pleased customers for decades and continue to attract people from around the city who come to get a taste of Boyle Heights.

Boyle Heights has many restaurants to choose from, whether you are hungry for authentic Mexican food or mouth-watering desserts. El Tepeyac and La Favorita have both been in Boyle Heights for more than 20 years and have become two of the most popular places to visit.

Manuel Rojas immediately greets customers to his El Tepeyac restaurant with a basket of candy, a kiss on the hand or a shot of tequila.

Once inside, the aroma of the   restaurant’s famous Mexican dishes overtakes the senses.   Throughout the day, a long line of customers waits anxiously outside the restaurant at 812 North Evergreen Avenue to be welcomed   by Rojas, known to regulars as “Don Manuel.”

“Hi! A table will be available. You want a shot of tequila meanwhile?” the energetic and charismatic 77-year-old asks a customer.

“The kids always tell me that he has taken them from the Tootsie Roll to tequila shots as they grew older,” said Joey Durán, Rojas’ nephew and the manager of the second El Tepeyac, located in the City of Industry.

Ã“scar Martínez drove to Boyle Heights from Orange County to visit the diner- style restaurant one weekday afternoon as mariachi and norteño music poured out from the jukebox.   “My business partner said, ‘You guys have to stop at this restaurant, it’s really good,” said Martínez.

He ordered the chile colorado and was very satisfied with his choice.“They have everything. I would eat everything from the menu,” said Martínez. 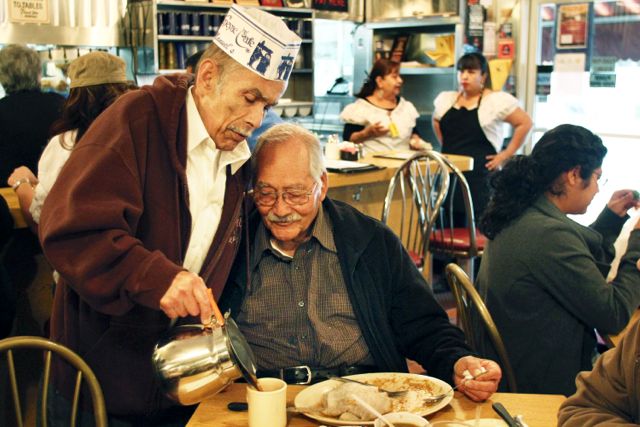 The restaurant’s popular five-pound burrito, called “Manuel’s Special Burrito,” began as a joke in 1970s when a group of Cal State Los Angeles students bet on who could eat the most food. The cooks made huge burritos for them, and the young men raced to see who would finish first.

Four years ago, the restaurant formalized the competition. It gives an El Tepeyac t-shirt   to anyone who can eat the entire burrito, “The burrito was a hit, and people began to ask for that special,” said Roxanne Rojas, the founder’s niece, who manages the restaurant. “You wouldn’t believe how much food people consume to get a t-shirt.”

Manuel Rojas’ late father, Salvador, and mother, Rebecca, began selling food from their home more than 70 years ago. They opened their first restaurant, El Tupinamba, in downtown L.A. in 1942, and a second, La Villa Café, in Lincoln Heights. They opened El Tepeyac in Boyle Heights in 1952. They never imagined that their business would have so much success.

Public figures like will.i.am, the rap and hip-hop star, and L.A. Mayor Antonio Villaraigosa, both Boyle Heights natives, are regulars. The hip-hop artist always sits at a back corner table, away from the crowd, and orders huevos con chorizo. During the mayor’s 2009 campaign, Villaraigosa made El Tepeyac his last stop.

The restaurant was featured on a Travel Channel show, “Man v. Food,” in 2009, which attracted more clients and strengthened its reputation as a Boyle Heights landmark.

“We are actually an itinerary stop for tourists who come to L.A.,” said Rojas. “You are also going to see Phillipe’s on Alameda Street, and then you will see Manuel’s El Tepeyac.”

Rojas still wakes up as early as 2 a.m. to be at the restaurant at 3 a.m. and work his daily eight hours. His niece and nephew plan to continue to sustain the family business and the legacy that attracts many people.

The smell of freshly baked sweet bread pierces the air from several blocks away. Through the window of   La Favorita bakery at 2305 East Fourth Street, a visitor can watch the bakers knead the dough and shape it into conchas, cuernos and bolillos.

From early morning to late afternoon, the bakery is crowded with students from nearby Theodore Roosevelt High School and with families eager to buy the delicious   breads, which most clients find affordable.

“I go to La Favorita because the bolillo is delicious, and the quality is great. It also reminds me of Mexico,” said Jelsy Gervacio, a college student who lives in Boyle Heights.

A dream crafted by father and son, Jesus and Jorge Beltrán, more than 40 years ago in Mexico, La Favorita continues to succeed even in today’s unstable economy. The family owned a bakery in Mexico City before immigrating to the United States and opening a bakery in Boyle Heights in 1971. Pleased with the success of the first bakery, the Beltráns began to expand. Today, they have seven other locations throughout the city.

A tray of bolillos, the bread that has made La Favorita Bakery famous, awaits baking. / Photo by Alondra Penaloza

La Favorita workers say they were the first to introduce the mini-concha and bolillo to Los Angeles, using recipes   from the family’s Mexico City bakery. Today, their sweet bread makes them one of L.A.’s favorite bakeries. (LA Weekly named La Favorita “best Eastside bakery” by in 2009.)

“Some of the bakers that we have here have been here for more than 20 years, and I think that is what keeps customers coming back,” said Manager Julia Cantana, who joined the bakery in 1986 as a cashier. “The bread is (so) delicious that even the bakers cannot stop eating. It’s like an addiction.”

Carlos Castañeda has worked at the bakery for 33 years, starting when he was 15, but he says he never gets bored baking cakes. “It has been a great experience because we are like a family here,” said Castañeda. His co-workers say that Castañeda is like a father to   the other bakers.

La Favorita provides bread and cakes for weddings and quinceañeras; it also   gives back to the Boyle Heights community, donating bread to institutions like Roca De Salvación Church.

“It’s a great blessing, because this is a time of great need for those who come here (for the bread) and for those who live here,” said María Elia Guzmán, the pastor.

“We donate bread to the church because we are strong believers of God,” said Cantana, the manager. “Our goal is to help the Boyle Heights community move forward, not fall back, and we plan to continue doing it with the help of God.”

What’s your favorite restaurant or food in Boyle Heights? Share in our comments section below.