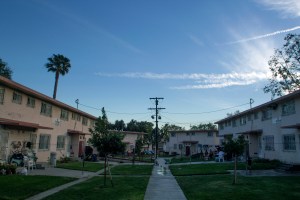 A $100,000 reward for information leading to those responsible for the May arson attacks in Ramona Gardens was announced Wednesday by federal and local law enforcement agencies.

Just after midnight on May 12, fire crews extinguished multiple small fires near 1347 N. Venegas Lane after molotov cocktails were used to target four homes in the housing development.

While the motive for the firebombings is unknown, many have expressed concerns about this being a racially motivated attack. Of the 1,791 residents in Ramona Gardens, 95 percent are Hispanic and 3 percent ”“ 56 residents ”” are black, according to the Housing Authority of the CIty of Los Angeles.

Boyle Heights Beat youth reporter Melissa Martinez recently reported that although Ramona Gardens had a history of racial tensions since the 1960s, they had not been as prevalent. The attack is the first of its kind since fire bombings took place there in the 1990s.

Three black families and one Latino family were targeted in the attack. However, police have not confirmed whether the incident was racially motivated.

“We recognize the fact that the attacks may have been racially motivated, but there is no evidence at this time to support that,” said Hollenbeck Division Captain Martin Baeza. “We’re looking at all avenues.”

Footage of video surveillance was also released showing eight suspects walking towards the housing complex through a bridge that crosses over the 10 Freeway. A few of the suspects appear to light Molotov cocktails on fire before running away toward the same pedestrian bridge.

The formation of a multi-agency task force dedicated to finding the responsible parties was also announced. The task force will include agents from the LAPD, ATF, FBI and the LAFD Arson Unit, and will be actively involved in bringing the attackers to justice.

Jose Huizar, 14th District Councilmember petitioned the L.A. City Council for $75,000 of the reward, which was subsequently approved.

The remaining $25,000 will come from the FBI and ATF, according to Baeza.